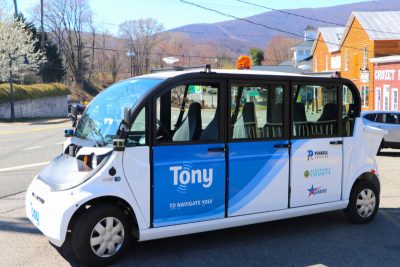 Perrone Robotics announced that its advanced autonomous shuttle technology product being launched for public operation in a Polaris GEM vehicle platform in Crozet has entered the final phase of testing before the pilot goes live in early spring.

This testing phase involves live testing both on Perrone Robotics’ private test track and on the public roads that will be served by this project. While standard functional tests to detect and avoid pedestrians, vehicles, and other objects are in progress, Perrone Robotics is also developing and executing a series of novel autonomous vehicle safety tests as part of the process.

While NHTSA has issued safety guidelines that autonomous vehicle companies can voluntarily comply with, no specific standards for performance or safety have yet been mandated by NHTSA. While several standards have been proposed by industry groups, no clear consensus view has emerged on what exactly should be tested to assert that an autonomous vehicle is safe for public use.

Testing for Perrone Robotics’ TONY GEM solution will leverage the company’s 16 years of autonomous vehicle experience as well as its novel autonomous vehicle safety watchdog monitoring technique. What’s more, the testing will also engage and involve input from Albemarle County public safety services and JAUNT’s transit operation experiences to create a practical autonomous vehicle test plan that will be applied to the TONY GEM shuttle to be launched in Crozet.

“This has been a valuable learning experience for all of us on our joint shuttle team,” said Dan Eggleston, Chief of Fire Rescue. “We are identifying key areas where public safety needs require well-understood interactions between the shuttle and between our fire, police, and rescue teams. Working through these interactions is important for safe day-to-day operations of an autonomous shuttle in the public domain.”

Brad Sheffield, CEO of JAUNT, agreed. “While our transit drivers are well trained to handle typical transit emergencies, acting as the safety operator for an autonomous vehicle adds new dimensions to their training. For example, the operators need to recognize if the TONY shuttle is taking appropriate action and when to step in to ensure the best outcomes when emergency vehicles pass by.”

The TONY GEM shuttle for Crozet is currently expected to begin the pilot phase in the spring and run through the summer. Read more at tonyshuttle.com.