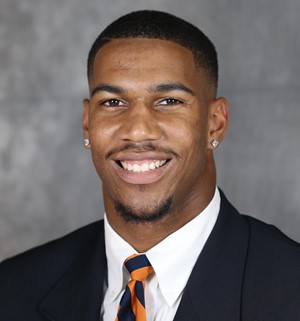 “Unfortunately, at the Snowden household, we don’t have an in-home gym,” the rising senior UVA linebacker said, which might make things difficult in terms of getting ready for the 2020 season.

The 6’7”, 235-pounder had a career year in 2019 as the Cavaliers won the Coastal Division for the first time and earned an invite to the Orange Bowl, recording 72 tackles, with 11 tackles for loss and five sacks.

The Silver Spring, Md., native figures to be a foundation piece to a defensive unit that returns eight starters next season.

UVA would be in the middle of spring practice now, but because of the COVID-19 epidemic, practice, school and everything else is shut down, and Snowden is back home in Maryland.

“I have a medicine ball, two resistance bands and a speaker, and I’m just making the best of it,” Snowden said. “It’s working on every day running, I mean, there’s a feel for that, so that’s not as big of a change. But a lot of pushups, a lot of body squats, jump squats, mountain climbers, med ball throws, stuff like that. So, it’s a variety of things. Kind of got to get creative with it, but it’s not the same, but we’re finding a way.”

Virginia coach Bronco Mendenhall is famous for his desire to create processes and systems with measurements to define progress toward bigger goals.

“Coach Mendenhall loves consistency, and so, I know kind of this definitely throws them off a bit, but also it’s time for him to relish, like, he loves challenges and creating chaos. And this is just another challenge that although he doesn’t have control over it, I know he’s excited to see, like, how we all react and different ways to keep us engaged,” Snowden said.

Mendenhall talked last week about how he has come up with a check-in system in which position coaches and strength and conditioning staff check in with players regularly to track what they’re doing.

Snowden said that has helped create structure, but it’s still up to the individuals to make it work.

It’s a test of accountability that he knows Mendenhall is paying close attention to.

“In a weird way, Coach Mendenhall is enjoying this, because I know he’s excited to see who will, like, step up and show creative excitement when they’re at home,” Snowden said.

Meetings with coaches, over the online app Zoom, give the different position groups the opportunity to go over film, with the key difference that, without spring practice film to break down, “we don’t have new film that we’re constantly watching that we can kind of critique.”

“So, we’re just looking back at old stuff. And just new concepts that we’re going over for next season. Every night with your position room,” Snowden said.

At least there’s that opportunity for virtual instruction. And then there’s the help from strength and conditioning coach Shawn Griswold in the form of workouts tailored to what each player has available in terms of workout equipment at home.

The biggest challenge is probably diet.

“It’s definitely a bit of a challenge, just not having the dining hall around the corner, you can go get something to eat,” Snowden said. “I’m also not having, as like, strict a schedule where you can just I know every three, four hours, I have to eat something, and I can just grab something to eat at school. So, it’s a bit of a bit of an adjustment, but starting to sort of find a little bit of a rhythm.”

Aren’t we all, though.

Two weeks ago, Snowden was on spring break in Fort Lauderdale when he got the news that UVA was going to online classes, the original announcement being that going online would be re-evaluated on April 5.

He got back to Maryland that Friday, and has been hunkered down there since.

“I’ve just been home, finding different ways to kind of work out, talking to my teammates all the time, talking to our coaches, because they’re still trying to figure it out, too,” Snowden said. “And so, we’re kind of trying to collaborate as to how we can best make things as normal as possible, even though there’s obviously extreme circumstances.”