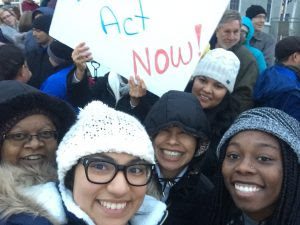 Not until coming to the United States did Keyri Lopez-Godoy begin to enjoy school. In El Salvador it had been just something she had to do, but after her parents brought her to the U.S. when she was eight years old, it was a requirement that she came to love, thanks to a litany of encouraging teachers.

This spring, so many years later, Keyri (pronounced “Katie”) has been back in the elementary school classroom, this time as a student teacher, offering students the same “strength and oomph” that has fueled her own journey. And even though for years college was an unfamiliar word, Keyri will graduate from Eastern Mennonite University on May 6 with a degree in elementary education. Along with nine others, she will wear EMU’s Cords of Distinction in honor of her impact on the EMU and local communities.

“Keyri is truly an inspiration wherever she goes,” said Professor Cathy Smeltzer Erb, education department chair. “She has a remarkable ability to remain positive in face of very challenging circumstances, and her effervescent personality, warm spirit and hopeful outlook promise to transform the lives of her students just like her teachers transformed her life.”

Graduation will be another moment of having achieved what once appeared impossible, another opening door to remind Keyri of “the people who have made an impact and who have changed my perspective and the way that I carry myself,” she said recently. “It has been because of those relationships that I have gotten this far.”

That perseverance and support has resulted in a chance to give back – in an anticipated position in a local elementary school beginning this fall.

Keyri’s elementary school years in her new hometown of Charlottesville, Virginia, provided the first of many teachers she remembers with heartfelt gratitude, among them an English as a Second Language teacher, who she said “literally took me by the hand and said ‘Keyri, you are going to learn to read and write, and we’re going to do this together.’”

Adjusting to the new environment, though, took time, and a celebration at the end of her fifth-grade year caught her off guard. That day was “strange,” she remembers, as the classroom filled with grandparents, relatives and parents. Her own parents, though, weren’t there. The whole family was still figuring out the new education system, and even she hadn’t realized there would be a “graduation” ceremony.

“I remember just feeling lonely,” Keyri remembers, until her teacher came over to her with a gift and a letter.

“She knelt down – she was a tall lady – and looked straight in my eyes, and she said, ‘Keyri, I am so proud of you. You are my bright star. I’m really excited for what you will do in the future. Please come back and visit me.’”

In seventh grade, Keyri learned of her undocumented status at the same time she learned that new word, college. “I just kept hearing that word, and I was like, What is that? What does that mean? Is that a thing? Is that a person? What is that?”

When she showed her mother an application for a college preparatory support class, however, her mom explained why she would not be able to attend college: she was undocumented.

Though the moment was “probably very hard for my mom,” Keyri said she was not to be discouraged.

“‘This is a label,’” she told herself. “‘This will not limit me in any way.’ Even though in reality it did, I guess in my 12-year-old self, I said ‘This is not going to prevent me from working really hard and going to college.’”

That year, she “worked and worked as hard as I could,” and started taking more challenging classes. In eighth grade, she took a ninth-grade algebra class, and “struggled – but made it through” thanks to math tutoring that her teacher and principal arranged.

Every morning for an hour before school, she met a tutor, Louise Gallagher, and when Keyri learned that the work had brought her grade up to an A, she ran through the school to find her.

“I just hugged her and I said, ‘I did it!’” Keyri remembers. “We are still very close friends. She is one of my mentors. She is even helping me get through school. She has been a backbone.”

High school: ‘Can I succeed more?’

“Is there more that I can do?” she asked herself. “Can I succeed more?”

Yes, she could – but that option, Advanced Placement (AP) courses, for college credit, revealed a twofold disadvantage.

“I had everything going against me,” she said of her first AP class, history, which she took in tenth grade. “The work itself, the amount of work, the reading, the vocabulary I wasn’t used to. It was a whole new language for me, and I was like, ‘How do I tackle this class?’”

The college prep program had equipped her with note-taking and organizational skills, but she hadn’t been taking honors classes, which typically fed into the AP courses. And she felt like she came to school with less academic savvy than her classmates. “A lot of the kids had parents who had gone to college, who had very advanced conversations at home. In my household, we had conversations when we were able to, but my parents worked day and night to provide for us, so it was tough.”

Again, having a teacher rooting for her made the difference. On the day of her first AP exam, her teacher Amber Roberts brought each student a goody bag of cookies and candy and a note that said, “You will rock this exam.”

“That was the strength and the oomph, the confidence booster that I needed to say, ‘I got this,’” Keyri remembers.

It took her all morning to finish, but she passed the test.

“I go back to the moment” – this would have been the previous year – “that I went up to her and I asked her, ‘Do you think I can do AP history? And she did not lie to me. She said, ‘Yes, you can.’”

That year – 2012 – also marked an opening of possibility for Keyri through the Deferred Action for Childhood Arrivals (DACA) program. It allowed people brought to the United States as children and without documentation to reside, work and study legally here under renewable two-year permits.

Keyri would go on to be accepted into six colleges, but wasn’t sure how to pay for this next step. DACA, after all, didn’t qualify her for federal financial aid.

One of those six colleges in particular – EMU – seemed determined to help work out the money, though. And, her high school counselor Keri O’Connor told her about the Emily Couric Leadership Scholarship, worth $30,000.

“And this is where I also go back to relationships,” she said: Not only was she nominated for the scholarship – each area high school could nominate just one female student – but the administration team at her school helped her prepare for the interview, in front of 20 people in downtown Charlottesville, Keyri said.

Another school counselor bought her an outfit for the interview. The principal Jay Thomas pulled together a team of teachers and community members for mock interviews. And on the day of the interview, O’Connor came to her house to take her.

That evening, when she received the phone call congratulating her for being chosen the scholarship winner, she and her mom both started crying, there in their kitchen. So did her dad, when he came into the room, even though “my dad never cries,” she said.

Keyri traces her successful interview back to her school counselor’s assurance to her: “She was just there with me and said, ‘We will get through this together.’”

From the time she found out about her immigration status until DACA began in 2012, Keyri knew her life could change at any moment. There was always uncertainty “because one day I could be here, and another day I could be back in my country.”

With President Trump’s 2017 rescission of DACA – and the ongoing debate about the program – Keyri doesn’t know her future in the U.S. She continues to rely on the encouragement offered by the people who tell her, “Keyri, we back you up. No matter what happens, we will be there to support you.”

It’s part of what EMU celebrates: global perspective. She points to one of the education department’s objectives: to prepare teachers to work “with diverse populations in an ever-changing cultural and global context.”

“To me that means you work in a global mindset. You have students from all over the world, from different backgrounds, from different experiences of life, and that does not make them less or more of a human,” she said. “That just makes them, them.”

While she has a teaching position lined up now, she may not know where she’ll be in three or five years. But, she said, “I do know that in whatever it is that I end up doing, it will be in service, giving back to people, educating, doing advocacy, and standing up and using my voice for the things I believe in.”