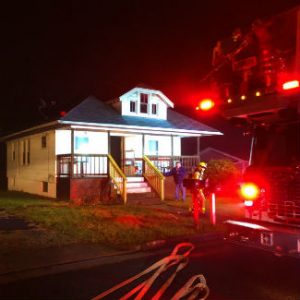 A Harrisonburg resident is safe today after functioning smoke alarms alerted him to a possible fire inside his home.

Harrisonburg firefighters were dispatched to the 800 block of Stuart Street at approximately 3:30 a.m. for a reported structure fire with smoke alarms sounding.

Upon arrival, firefighters found a one-story, single-family dwelling with smoke visible inside the residence. The lone occupant was outside the residence upon the Fire Department’s arrival and reported that he was awakened by the smoke alarm.

Firefighters entered the home and were able to determine that the source of the smoke was a malfunctioning oil furnace located in the basement.

Power to the furnace was secured and the home was ventilated, allowing the resident to remain in the residence.

“This is exactly the kind of incident that we want to report,” Fire Chief Ian Bennett said. “Functioning smoke alarms save lives and we are happy that a potentially life-threatening situation was quickly addressed. In this case the emergency response system, beginning with prevention efforts, worked as it was designed.”

According to the National Fire Protection Association, the risk of dying in reported home structure fires is 54 percent lower in homes with working smoke alarms than in homes with no alarms or none that worked. HFD will install a smoke alarm in any residence that needs one through its Community Risk Reduction Division.

Residents can request a smoke or carbon monoxide alarm by contacting HFD during business hours or via social media.