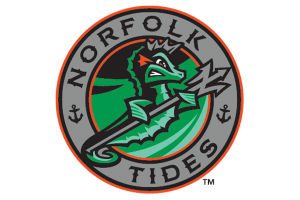 The Rochester Red Wings belted four home runs to top the Norfolk Tides 11-4 in the opener of a four-game set Monday night at Harbor Park.

Austin Hays homered and drove in three to pace Norfolk’s 10-hit attack. Rated as the #5 prospect in the Orioles system by MLB.com, Hays has now registered two home runs and driven in eight runs over his last four contests.

After three scoreless innings to open the contest, the Red Wings got to Norfolk starter Keegan Akin (4-3) in the fourth frame. Jaylin Davis put the Wings on the board with a two-out RBI single, and Zander Wiel followed with a two-run homer to put Rochester on top, 3-0.

The Wings broke the game open two innings later with five runs off of Tides reliever Josh Lucas. Wiel connected on another two-run homer to up Rochester’s lead to 5-0, and Drew Maggi later added a three-run blast in the frame that gave the Wings an 8-0 advantage.

Making his first appearance since he started the Triple-A All-Star Game, Akin took the loss after allowing three runs on five hits over five innings of work. The 24-year-old lefty struck out six to up his season total to 95, moving him past Bowie’s Michael Baumann for the most strikeouts recorded by an Orioles minor leaguer this season.

Rochester starter Devin Smeltzer (1-1) earned the win after allowing a run on three hits over six innings. He walked two and struck out eight while throwing 70 of his 95 pitches for strikes.