While debt yield-curve has always been a primary indicator of the US economy’s prospects, but analyzing sales data of everyday items can help affirm the thesis. Previous research on sales of Television sets and cars were reasonably accurate in predicting what we know and fear – The recession. 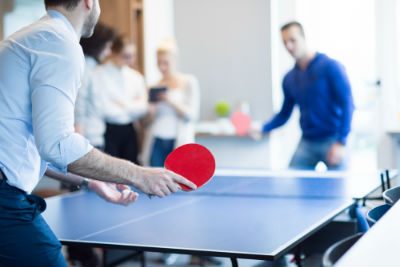 In this report, we’ll take a look at Ping Pong table sales data over the years, and its probable impact on the economy, particularly startups. We’ll also be interviewing major equipment manufacturers and bloggers in the table tennis industry to know what they feel about the same.

Ping Pong has long been associated with startups. A popular Saying in Silicon Valley is that you’re not even a startup if you don’t have a ping pong table in your office. Quite true!

The sport is a hit among employees, often the nerdiest ones, and a great way to build company culture. These tables can be seen in the office of almost every startup from the likes of Google, Facebook to the new-age startups like Instacart.

What Vendors Are Saying

Recently we talked to three of the top sports equipment vendors who’re also the major suppliers to the tech companies in the valley. While we can’t disclose the name of the vendors, but here is what they had to say:

Vendor #1 – We have a long-standing relation with Twitter and have been supplying all their rec products. However, for the past couple of quarters, orders are not coming through, and this is just not limited to Twitter.

Vendor #2 – Our YOY sales are down by 34%, the lowest in the last five years. The orders are simply not coming through. Companies have been reducing the budgets while some companies find such sports equipment a bit distracting in workplace environment.

Vendor #3 – Sales are definitely down, and whatever order we are getting are from our previous customers. In the last 6-months, we have not received a single order from a new client.

Sales are down, but what does this mean?

So it’s quite clear the sales are on the decline at least in the valley, but what does this imply? Does this mean existing startups don’t have enough money to spend on such items, or is there a different reason?

While it is definitely clear, the number of startups opening in the valley in the last couple of years has declined but does that also mean existing startups are struggling?

Insiders have a different take

We reached out to Kevin James, founder of PingPongBros. He runs a popular blog on ping pong where he shares tip and tricks and reviews various sporting equipment.

This what he had to say:

“I don’t think the declining ping pong table sale has anything to do with how startups are doing or their ability to raise funds. You see, Ping Pong table is a quality piece of equipment which will last you easily 3 to 4 years and may be more if maintained properly. So the vendors may have experienced a sudden spike between 2011 to 2017 when the startup was more of a buzzword, and they were opening in every nook and corner. But the current sales figure may actually represent the real demand among corporates.

Secondly, with co-working concept on the rise and companies like WeWork are opening mega offices. More and more startups prefer to use such co-working space and ditch the traditional office. Hence this also affects sales.

Lastly, I feel Ping Pong has always been a popular way to build a workplace environment. Well, this is used to hold quite well a couple of years back. More and more companies are deploying more active ways to engage employees, and Ping Pong does not fare in that list.

I would also like to add that the sale of the Ping Pong table is actually seeing an exponential increase among the retail audience. If you look at Amazon/Walmart for Ping Pong Tables, you’ll find tables like Stiga Advantage or Joola Inside with couple of thousand reviews, most of which are in the last couple of years. And this is not a sign of slowing economy rather a thriving one.”

We reached out to MD Sports, a popular manufacturer of sporting goods, and this is what their spokesman Ivy Liu had to say:

“Traditional brick and mortar sports shop or small online retailers may witness declining sales because most of the customers prefer to buy sports goods online on Amazon/Walmart. There are two reasons for this – one is the cost and other the logistics. While purchasing offline, the vendor charges the transport fee while buying online most of the time shipping is free. Also, buying online is cheaper, and many companies prefer to buy them directly online.

I can’t talk about our company’s sales figure but what I can say is Ping Pong is here to stay, and I feel the sales are actually going to sky-rocket in the coming years.”

So there you have it, both our interviewers concur to the fact that the demand for the sport is picking in the retail segment. However, among the corporates, the sale has not declined rather just averaging to its real figure.

Only time will tell how the economy fares in coming years but we can be quite certain Ping Pong is not the reason for its decline.