Ocelot tracking is revealing new information about this elusive cat 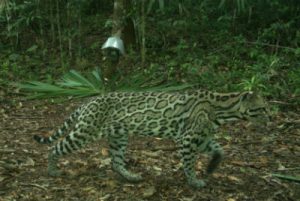 Cameras mounted opposite each other a few feet off the ground captured this image of an ocelot in the forests of Belize.

It is night in a Central American pine forest, and an ocelot is following a game trail. The predatory wild cat, approximately twice the size of a housecat, is hoping to catch the scent of a rabbit or hear the rustle of mice in the undergrowth.

Along the way, the ocelot passes between two remotely triggered infrared cameras set at about knee-height off the ground. The cameras flash simultaneously, startling the animal and momentarily illuminating the forest. The resulting photographs capture the unique markings of the elusive cat: solid black bands and spots over tawny yellow fur, a pale underbelly, and a bright white spot on each rounded ear.

Moments like these have been a regular occurrence in the pine forest and broadleaf jungles of Belize, where Professor Marcella Kelly, of the College of Natural Resources and Environment, has spent the last 15 years tracking the movements of predatory ocelots and jaguars using remote sensor cameras. Now her research, one of the longest continuous studies of wild cat populations in the world, is giving scientists new insights into the range, population sizes, and migratory habits of Central American wild cats.

“The technique works extremely well for jaguars and ocelots,” said Kelly, an affiliate of the Fralin Life Sciences Institute. “Because they have a spot pattern on their coats, we can identify them all the way down to individuals. The spot patterns don’t change throughout their life and they’re all unique, like a fingerprint, so we’re able to follow these animals around year after year and gather an enormous about of data about them.”

Kelly and Christopher Satter, a doctoral student in Virginia Tech’s Department of Fish and Wildlife Conservation, have recently collaborated with other researchers to publish two papers utilizing this ocelot data. A paper on population densities in Belize was published in the Wildlife Society’s Journal of Wildlife Management, while another on the use of spatial capture-recapture models to measure sex-specific population dynamics appeared in the journal Ecosphere.

Kelly said that before remote camera techniques were developed, there wasn’t really an accurate way to estimate population sizes for elusive wild cats.

Kelly’s years of research and data collection have led to a more dynamic understanding of how wild cats like ocelots and jaguars adapt to differing environments, how they share territories with other wild cats, and what their survival rates are. The remote camera method is also less stressful for wild animals, allowing for a less invasive analysis of their occurrence and distribution across the study areas.

Kelly’s passion for researching wild cats started at the University of California–Davis, where she did her doctoral research identifying individual cheetahs from photographs in Tanzania.

“I’ve been lucky enough to be at the beginning of the wave in terms of camera trapping,” Kelly said. “Now our practices have become a standardized technique in the field. The effort we put into designing effective methods to use cameras to measure wild populations are now being taught everywhere: if you’re going to survey for forested animals, you’ll follow procedures partly developed in my lab.”

Kelly said that this standardization is a valuable step, because it allows researchers to compare data across sites and species so that research on the drivers of population dynamics of carnivores can be understood in a broader context.

“I didn’t think the project would go on as long as it has, but I’m glad we’re still doing it,” Kelly added. “A lot of graduate students and technicians and volunteers have contributed to this research, and I’m grateful for their efforts.”