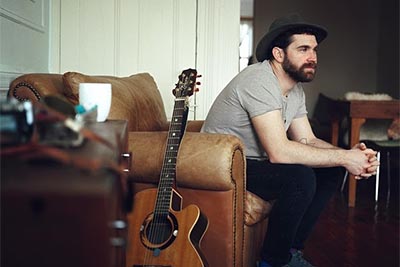 A Brookyln-based Americana crooner is set to make a stop on Friday, July 1, at 6 p.m. at Plaza Antigua in Waynesboro.

Kevin Daniel & The Bottom Line bring their tour to the River City en route to an event in South Carolina on Saturday.

The event at Plaza Antigua in Waynesboro is free and open to the public.

His mother and stepfather were amateur pilots and died in the winter of 2013 in a plane crash.

Kevin wrote over a dozen songs, all fueled by the grief of losing his parents, as well as the celebration of the large lives they were known for. From those songs, six were chosen to record, including one written specifically for Kevin’s parent’s memorial service.

“I always knew I wanted to record my own music, and a life spent being in other people’s bands had prepared me to lead my own, both in the studio and on the stage. It was losing my parents that gave me the kick in the ass to finally do it.” said Daniel.

He has since released an additional EP “Myself Through You” and a full-length LP, “Things I Don’t See.”
The LP album has taken Daniel all over the U.S. and the UK, touring both solo and with a full band.

Plaza Antigua is located at 23 Windigrove Drive in Waynesboro.

Read more about Daniel at thekevindaniel.com