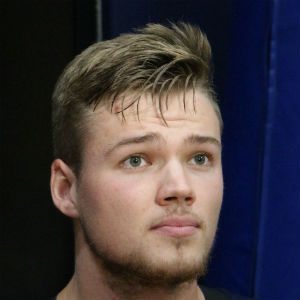 The game was no longer in doubt, but that didn’t matter to Virginia’s lone senior.

With the Virginia Cavaliers leading 73-51 over Virginia Tech, Kihei Clark turned the ball over, and Nickeil Alexander-Walker looked to have an easy two points — maybe the only easy two points of the night for the Hokies — on the other end.

As it turns out, with Jack Salt on the floor, nothing comes easy, not since his debut four years ago and certainly not on this mid-January night against his school’s in-state rival. Salt, at 6-foot-10 and 250 pounds, lumbered back and fouled Alexander-Walker before he could lay it in.

It’s not a play he needed to make and not a play many players would make, given his team was well ahead with just over five minutes to go. But it’s one he made because, well, that’s all Salt has ever known and ever done for the Cavaliers. Seconds later, when he walked to the bench for the final time that night, the crowd at John Paul Jones Arena rose to its feet.

He finished the night with four points, five rebounds, three fouls and the distinct honor of having given Virginia his best effort for the 105th time in 105 career games, a perfect 100 percent success rate for a player whose success has come from just that: consistent effort, day after day, week after week, month after month, season after season for the past five years.

Even this year, with minutes dwindling and back pain nagging, he has upheld that work ethic.

“His attitude never changes,” Ty Jerome said in early March. “He will give 110 percent for us every single possession, and that’s something you don’t see in almost any other guy in the country. If you ask them to play 30 minutes one game and five minutes the next, I don’t know if any other guy in the country will give you their all, and he does. He continues to lead every day and fight through back pain.

“He’s a warrior, and I would go to battle with him any day.”

On Saturday, the Cavaliers will go to battle with Salt for the final time at John Paul Jones Arena. The lone senior on this year’s Virginia team, Salt will be honored for Senior Day before the Cavaliers begin postseason play with the ACC tournament next week.

The journey to Senior Day has been a long one for Salt, an Auckland, New Zealand native whose commitment to Virginia came back in September, 2013. After redshirting during the 2014-2015 season, Salt joined the rotation in his redshirt freshman campaign and then started all 68 consecutive games over the next two seasons, a streak he extended to 70 with two straight starts to open his senior year.

Salt is the only member of the 2014 recruiting class remaining. B.J. Stith transferred after one year, and Marial Shayok transferred after three. Isaiah Wilkins exhausted his four years of eligibility last year. Salt’s been at Virginia long enough for his teammates to poke fun at his age, but but also long enough to remember when Virginia basketball wasn’t nearly what it is now. He bridged the gap between the early up-and-down Tony Bennett years and the program’s powerhouse status of today.

When Salt arrived in Charlottesville, the Cavaliers hadn’t even won an NCAA Tournament game under Bennett, much less an ACC championship. When he leaves, he’ll have experienced (redshirt year included) three regular-season ACC titles and two ACC tournament crowns. Bump that up to four and three, respectively, if the Cavaliers can take care of business Saturday in Charlottesville and then a week from Saturday in Charlotte. He’ll go to an NCAA Tournament for five straight years, something the program has never done.

When Salt arrived in Charlottesville, the Cavaliers were a program moving in the right direction but still experiencing lots of roster turnover, making it hard to establish a culture. Salt immediately embraced — and eventually become the embodiment of — the exact culture Bennett wanted to cultivate.

That’s why he stuck around when others transferred.

That’s why he’s on track to have played in more than 120 games for a single program, an increasingly rare feat in this day and age.

That’s why, quite simply, Virginia basketball has become what it is.

The patience, trust and work ethic displayed by players such as Salt allowed Bennett to build his program to among the elite of college basketball without sacrificing the principles he brought to Charlottesville the day he arrived. A relatively unknown recruit, Salt will never play in the NBA like fellow early Bennett disciples Mike Scott, Joe Harris, Justin Anderson and Malcolm Brogdon nor earn the college acclaim of someone like London Perrantes or Isaiah Wilkins. But he was a quiet, steady, reliable force as all of those players received the headlines and praise as integral parts of Bennett’s program-building.

“Jack is the ultimate team player” Bennett said when Salt was awarded the prestigious T. Rodney Crowley Jr. Memorial Scholarship last spring. “The standard he’s set as a student-athlete, on and off the court, has impacted everyone in our program.”

Over the course of five seasons, Salt has fulfilled each of Bennett’s famed five pillars: humility, passion, unity, servanthood and thankfulness.

But it is servanthood that best encapsulates Salt’s career. He moved thousands of miles from his home just to redshirt his first year and play sparingly the following season. He took on the role of being the best version of Jack Salt — as a player, two-time team captain and veteran leader — he could be. Even as a senior, Salt has been praised for being the same strong presence every day whether he had played five minutes or 25.

“He’s a very vital piece of this on and off the court, at practice and at games,” Kyle Guy said after a win over Pittsburgh. “He exhibits the most selflessness of anybody on the team, and he knows his role. He knows that whatever it takes to win, he’s happy with.”

When Salt walks onto the court prior to Saturday’s matchup with Louisville and raises his framed jersey, he’ll surely receive a loud standing ovation. The number of those he’s received — for a dive on the floor for a loose ball, for a perfect defensive sequence or for simply fulfilling his role to the best of his ability — far outweighs any number on any stat sheet.

Saturday marks the end of an era for Jack Salt in Charlottesville. But he also knows that for this team, the most important part of the year is just beginning. And he’ll be leading the charge.

In a way, he’s always been leading the charge.