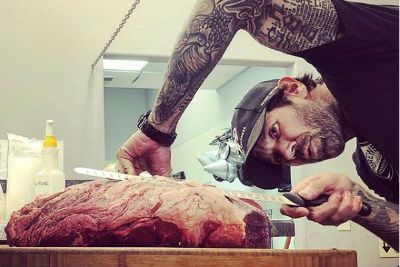 One of Highland County’s most popular food destinations, High’s Restaurant, has hired Christian Brown, a celebrity chef who has appeared on Food Network’s “Cutthroat Kitchen.”

Christian Brown is best known from his second Food Network appearance as the Chef that appeared on Cutthroat Kitchen (Season 15, Episode 3, “Tournament of Terror, Heat 3 HD”) and lost the Frog Leg Challenge due to being singled out to prepare his frog legs inside a coffin with a dull knife. Guest Chef and Judge, Jet Tila, eliminated Chef Brown from the contest due to his frog legs being “too simple.” None of the other contestants had to attempt this feat.

On Thursday, November 14, 2019 at 2:00 p.m., High’s Restaurant will be honoring the hiring of Chef Christian Brown with a re-creation of the Cutthroat Kitchen scene, complete with frog legs, a dull knife, and a real coffin. Due to public safety concerns, the “Ring of Fire” seen on television will be omitted.

Beyond Thursday’s appearance, “Chef CB” will be serving High’s traditional menu coupled with exciting new culinary dishes on Tuesday through Saturday nights. Locals and visitors will be able to enjoy culinary delights prepared by a nationally recognized Chef.

High’s Restaurant was founded in 1934. The establishment was built in 1901 and is known to be a brothel and saloon prior to its restaurant conversion in 1934. High’s is famous for its Liar’s Table. For 65 years, a group of locals utilizing their own key have entered High’s Restaurant an hour or more prior to opening each day. These country neighbors fix their own coffee and congregate at their favorite table sharing facts and a lot of fiction.