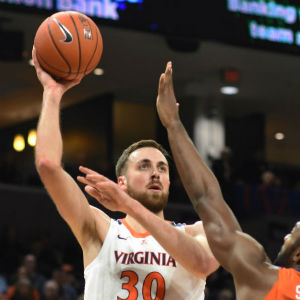 You’re not going to like this little riddle about Jay Huff.

Q: What would Jay Huff be if he played with fire equivalent to his talent as a 7’1” man with the ability to shoot from three, dunk from the foul line and block everything in sight?

A: A Duke Blue Devil.

Hate to say it that way, Virginia fans, but it’s true.

Jay Huff doesn’t leave Durham if he’s not the super-nice kid that, if you have a daughter, you’d love to have take her to prom, but when it comes to playing hoops, well …

Super-nice kid, who had two points and two rebounds in 13 minutes the other night in Blacksburg, and way too many games like that one, in general, for a guy with his immense skill set.

But Huff played Saturday night like a young man possessed, like, dare somebody say it, a young man who felt like he had something to prove.

“A little bit. I’d be a liar if I said I didn’t get a little bit more amped up for Duke games,” said Huff, who, as of this writing, missed a triple-double by a single rebound, finishing with 15 points on 7-of-9 shooting, nine boards and 10 – count ‘em, 10! – blocked shots.

The biggest of the blocked shots came with five seconds left. After Braxton Key missed the front end of a one-and-one with 13 seconds left, Tre Jones attacked into the frontcourt, and the point guard and Vernon Carey ran a pick-and-roll to perfection.

Jones found Carey under the basket all alone. Virginia’s Mamadi Diakite scrambled back into position to force Carey to pump-fake, and that gave Huff, who had defended the pick-and-roll at the top, trying to double the ball out of Jones’ hands, time to get back into the lane.

When Carey finally shot the ball, Huff guided it off the backboard and back into his hands.

He should eventually be credited with a rebound of that miss created by his block, which would be his 10th rebound, completing the rare points-rebounds-blocks triple-double.

Either way, the block, the rebound that was or wasn’t, the ensuing free throw, all key in preserving Virginia’s 52-50 win.

“He was certainly fired up, and we have to keep stepping in the right direction with that,” said Virginia coach Tony Bennett afterward.

And Bennett certainly has experience with seven-footers with skills out the yin-yang who had problems playing with a chip on the old shoulder.

Think Mike Tobey, a former ACC sixth man of the year, who never scored more than 7.3 points per game in a season, mainly because he couldn’t figure out a way to earn more than 18.1 minutes per game in any one season.

If you had any thoughts on what Huff would offer Virginia down the stretch, it would be that he’d been giving you more of the same, which is, far less than he seems capable of.

And then he goes out and does what he does in a big win over Duke, and totally redeems himself.

Kinda reminds you of that Tobey breakout game late in his senior season, the home finale win over Louisville, when the big guy, who had just gone scoreless in a mid-week win at Clemson, in 10 minutes off the bench, went for 15 points and 20 rebounds to key a 68-46 win.

Tobey would then go on to have a big NCAA Tournament for Virginia, averaging 11.5 points and 4.8 rebounds per game, shooting 71.0 percent from the floor, as the ‘Hoos came up just short of a Final Four berth.

Might we have just witnessed Huff stumbling upon the same key that Tobey found to unleash himself four years ago?

Obviously, hard to say, but how good can this team be if it has that Jay Huff night in, night out the rest of the way?