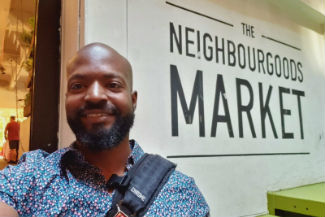 During an earlier trip to Johannesburg, Davon Woodard explored one of the city’s most popular gathering places, the Neighbourgoods Market.

Davon Woodard will spend the 2019 fall academic semester as a visiting scholar at the University of the Witswatersrand in Johannesburg, South Africa.

There, the Ph.D. student in the planning, governance, and globalization program in the School of Public and International Affairs and a research trainee in the National Science Foundation-sponsored Urban Computing (UrbComp) Certificate program administered through the Discovery Analytics Center, will conduct the first phase of research for his dissertation. He is comparing both online and offline social networks in two historically marginalized black communities — Johannesburg and Bronzeville in Chicago, Illinois — to get a better understanding of their structure, practices, and effects.

His research on social networks is unique in that it concentrates on minority communities.

“My work is guided by the principle that all citizens have the right to live in a city that both represents and responds to them,” Woodard said. “The goal is to provide 21st-century urban planners and local community leaders with insights and expanded tools to increase the voice and visibility of those historically excluded from, or peripheral to, the creation of cities, neighborhoods, and policy.”

Woodard said that the multidisciplinary UrbComp program has allowed him to create a specialized Ph.D. that connects critical urban theory, social network theory, economic geography, digital ethnography, and Black Feminist theory into a distinct and expansive vocabulary that will not only impact the lived experiences of urban citizens worldwide, but also contribute to theory and methods from a wide array of fields.

Woodard said he chose the larger South African city of Johannesburg and the smaller historic Black American neighborhood of Bronzeville, located just south of the Chicago loop, as field sites for two reasons. Despite diverse histories and local governance structures, they have similar patterns of spatial, social, political, and economic exclusion of their urban Black residents. And, they have both been leaders in adopting social media to connect with and engage their citizens.

He will explore how the built environment influences the creation of social networks; how contemporaneous urban interaction is framed; how community members view their own positions within their respective social networks; and how network positions influence and inform an individual’s relationship and engagement with local government.

“What I have learned about data science in the UrbComp program is influencing my approach to problems because it broadens the toolkits available to ensure that citizens have a voice in how the community represents them and serves their needs,” Woodard said.

To give himself a head start, Woodard has spent part of the summer compiling South African census data along with other data sources to identify Johannesburg wards with comparable social media usage rates, demographic, economic, and political participation.

His research in Bronzeville will begin in the spring.