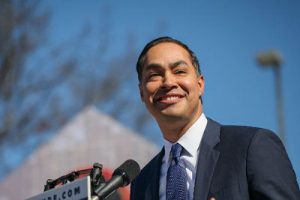 The plan, announced at TPI Composites Inc., will double the investment in wind power in the United States, and expand the exporting of renewable technology around the globe.

This proposal includes a number of bold ideas including permanently extending the Production Tax Credit and Investment Tax Credit, investing $10 billion a year in renewable technology export promotion, creating a $200 billion Green Infrastructure Fund to invest in climate infrastructure such as smart grids, evaluating government projects for their carbon impact, and banning fossil fuel exploration and extraction on federal lands.

“The United States will lead the world in the 21st century clean energy economy by making smart investments in renewable energy. That’s why I plan to double wind power at home and export U.S.-made green technology around the globe,” said Secretary Castro. “We do not have to decide between protecting our environment and growing our economy. We can do both.”

Highlights of Castro’s proposal include: