How did they get here? A look at how Virginia built its first Final Four roster since 1984 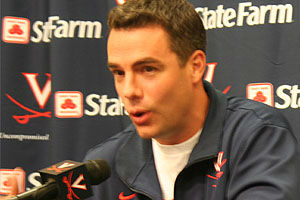 A decade ago, Tony Bennett arrived at Virginia looking to turn around a program that hadn’t been to the Final Four in 25 years. He’d need time to implement his coaching style and find the recruits to fit his system. And 10 years later, he’s ended that streak. His Cavaliers are in Minneapolis and face Auburn on Saturday.

How did Bennett do it? It certainly was a long time coming. Great players came and went as the Cavaliers rose to the pinnacle of regular-season success but still struggled to get it done in March under Bennett … until now. Here are the players who have this team within two games of the program’s first national championship.

Jack Salt. There wasn’t a whole lot known about Salt, a New Zealand native, when he committed to Virginia way back in September, 2013. A big, physical body, Salt was a standout volleyball player. He chose the Cavaliers over potential suitors St. Mary’s, Boise St. and Pitt, famously visiting Grounds during a Taylor Swift concert that must have left a good impression. Salt’s teammates joke frequently about how he’s been in Charlottesville seemingly forever, but they’re not that far off-base. When Salt committed, Virginia hadn’t won an NCAA Tournament game under Bennett. Now, five-and-a-half years later, he’s become a leader and has embodied the culture Bennett cultivated at Virginia. It’s no coincidence that arguably the most successful years in program history have come with Salt on board.

Mamadi Diakite. If Salt were considered “new” to basketball having picked up the game in middle school, it’s hard to find a word to describe Diakite, a Conakry, Guinea native who first picked up a basketball in his home country due to his height but didn’t play organized ball until moving to the United States for high school. Diakite had always bounded with energy and athleticism, but learning the nuances of the game proved to be a long process. Still, he picked up offers from all over the nation. He decided to play close to his new home (he attended Blue Ridge School in Virginia) and play for the Cavaliers. Diakite’s transition to becoming an effective college player took time. He redshirted a year and started to carve out a role in 2016 and 2017. This season, though, Diakite has made gigantic strides on both ends. He’s an agile, versatile and more disciplined defender, and he has shown soft touch in the paint as the Cavaliers have developed an interior scoring presence they sorely lacked last year. Virginia’s “X factor” (as Bennett calls him) is playing his best ball at the best time.

Ty Jerome. A very early commitment, Jerome picked UVA in September, 2014 — even before Diakite, who ended up reclassifying to the 2015 class. The timing was perfect for the Cavaliers, though. At the time of his commitment, Jerome’s other offers were from mostly mid-majors and smaller schools in the northeast. He then rose from borderline top-100 recruit to inside the top 50, per 247 sports. This was a big early recruiting win for Bennett. He zeroed in on Jerome as an heir apparent to Malcolm Brogdon and, eventually, London Perrantes, and it proved to be a perfect start to his best class ever.

Kyle Guy. Virginia filled the other half of its backcourt with Guy, who went on to win Indiana Mr. Basketball his senior year. That the Cavaliers snuck in and grabbed him before his junior campaign had even started, though, was a significant surprise. “I’m just as shocked as anyone,” Guy told ESPN after he committed. Virginia beat out several in-state programs, including Indiana, and other offers from across the nation for Guy’s services.

Jay Huff. Duke’s pursuit of hometown product Huff was heating up when the big man picked Virginia instead. Huff visited in February, 2015, got offered in the following weeks and was a Cavaliers commit by May. At the time, Huff was the fourth member of the Virginia recruiting class, joining Jerome, Guy and Sacha Killeya-Jones, who would later decommit.

De’Andre Hunter. This was a program changer. After Killeya-Jones’ decommitment, the Cavaliers needed a lanky, athletic wing to round out an already-solid class. They offered Hunter in late July, 2015, he visited two weeks later, and he was a Cavalier commit by mid-September. Killeya-Jones, after decommitting, chose Kentucky, then transferred to NC State and was dismissed from the team before this season. Hunter is a projected lottery pick in this summer’s NBA draft.

Marco Anthony. Anthony’s career has been quiet thus far. The big guard scored 10 points in a win over Louisville last season when Nigel Johnson was suspended but hasn’t been a rotation player since.

Francesco Badocchi. Badocchi was — and still is — very much a mystery. He started high school in Italy and came stateside only by his junior year. After taking some time to adjust, though, Badocchi excelled, helping his Bishop Miege team early a Kansas 4A state title. The springy forward’s recruitment picked up very late, and Virginia beat out Illinois, Boise St. and other smaller potential landing spots.

Kody Stattman. Virginia got a late start to this class: Stattman, who committed in late August, 2017, was the first member. His commitment came with some legitimate momentum, though, after a breakout performance at the FIBA u17 Oceania Championship and another strong showing at the Adidas Nations event later. A few other high-major programs had come calling for the Australia native by that time, but Virginia won out.

Kihei Clark. Clark had committed to UC-Davis, but a big 2017 summer on the AAU circuit vaulted his recruiting rankings, so he decommitted. That’s when Virginia pounced on the undersized but scrappy California native, and he committed by October. Virginia had missed out on some bigger-name, higher-ranked point guards earlier in the recruiting cycle, but as the past few weeks showed, Clark has turned out to be just fine.

Francisco Caffaro. Following in Badocchi’s footsteps as a late commitment of the international variety, Caffaro became one of the first products of the NBA Global Academy, located in Australia, to sign with a Division I program. Not much was known about the 7-footer from Argentina until he averaged 16.7 points and 8.8 rebounds at the FIBA u18 Americas Championship, which boosted him to a four-star recruit, last summer. Caffaro is big, hard-working and energetic — not unlike Salt — and could be in line to contribute next year after redshirting this year.

Braxton Key. Bennett hadn’t found much success on the transfer market for most of his time at Virginia, but Key, who spent his first two years at Alabama, bucked that trend. Key had connections going back to high school with Guy and Diakite, and Bennett had offered him out out of high school in 2016. He was granted immediate eligibility shortly before the season began. Though he’s struggled shooting the ball, he has proved to be a terrific rebounder and versatile defender.