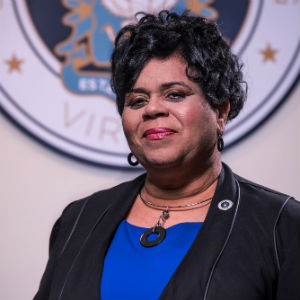 Harrisonburg Mayor Deanna Reed will deliver the commencement address at Eastern Mennonite University at the school’s May 3 ceremonies.

Named to the 2018 Essence magazine Woke 100, Reed is now in her second term as Harrisonburg’s first African-American female mayor. She is the executive director of On the Road Collaborative, a non-profit youth empowerment organization that helps more than 300 middle school and high school youth each year to set themselves on the road towards high school graduation, college matriculation and successful careers.

“Mayor Reed is a passionate advocate for young people in our community and that includes the students and community at Eastern Mennonite University, where she serves as a trustee,” EMU President Susan Schultz Huxman said. “She is an inspiring example of a leader who understands the power of partnerships in advancing vibrant healthy communities. We look forward to welcoming Mayor Reed to campus for words of inspiration and blessing.”

Reed, who joined EMU’s Board of Trustees in 2019, coined the phrase “moral compass” to describe the role she sees EMU holding within the Harrisonburg community and the Shenandoah Valley.

“EMU is our moral compass,” Reed said. “I state this in every speech I give there. EMU produces students who have a strong moral code. EMU teaches students to be honorable and caring to the world’s needs. To me, that is priceless.”

EMU students are “very unique,” she said. “These students are equipped to be peacebuilders and leaders for social justice and those are qualities that are life-changing … and world-changing. I hope they are ready to not only make a successful living, but also to make a difference in their community and the world.”

Reed represents Harrisonburg on the Virginia Municipal League Legislative Committee and the Human Development and Education Committee. Locally, she also serves on the Advisory Board for Civic Engagement, the Social Services Advisory Board and the Parks and Recreation Commission.

“Everything that I have is by the grace of God and that keeps me humble,” she said. “Success comes with humility.”