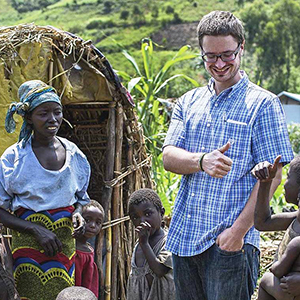 Michael J. “M.J.” Sharp ‘05, a United Nations official and former Mennonite Central Committee (MCC) peace worker, has been reported kidnapped with five others by unknown assailants in the Democratic Republic of Congo. In this 2015 photo provided by MCC, he visits with Elizabeth Namavu and children in Mubimbi Camp, home to displaced persons in the Democratic Republic of Congo. (Photo by Jana Asenbrennerova. Used with permission.)

A group of family, friends and others moved by the life and sacrifice of murdered United Nations armed group expert and peacebuilder Michael J. Sharp ’05 plan to summit Kilimanjaro in Tanzania on the second anniversary of his death.

The popular hike was “on MJ’s bucket list,” said his father, John Sharp, who during the 8-day journey will carry ashes to scatter on Uhuru Peak, 19,341 feet above sea level.

The March 4-15 expedition will raise funds for the Michael J. Sharp Endowed Peace and Justice Scholarship at Eastern Mennonite University, his alma mater. Trekkers each hope to raise  $10,000 for the scholarship.

The scholarship, started by friends and family shortly after Sharp’s death, is currently supporting its first recipient. David M. Nyiringabo, a peacebuilder in the Democratic Republic of the Congo (DRC), began studies this fall in the two-year MA in Conflict Transformation program at EMU’s Center for Justice and Peacebuilding (CJP). The scholarship is specially designated to support Congolese peacebuilders.

A United Nations armed group expert, Sharp was on his way to meet with leaders of a militia group in central DRC when he was ambushed in March 2017. He and a  colleague Zaida Catalán were seeking to better understand the militia’s structure, support networks, recruitment and use of child soldiers, and use of magic. The two were murdered by unknown assailants, and the investigation into their deaths continues today. Their three Congolese drivers – Isaac Kabuayi and two unnamed others – are missing, as is Congolese interpreter Betu Tshintela, who has been implicated in the murders.

Prior to this work, Sharp, a 2005 graduate of EMU, was with a repatriation program in the DRC that returned more than 1,600 combatants and 23,000 civilians to Rwanda. The program also helped facilitate four public disarmaments of Democratic Forces for the Liberation of Rwanda fighters.

Commemoration of his life and legacy

With the participation of a dozen or more  trekkers – several spots are still open – Sharp and trek co-leader Wilmer Otto ’73 hope the event will raise more than $200,000.

“Our goals are to commemorate MJ’s life and to breathe more life into his inspiring story of nonviolent conflict resolution,” Otto said. “This trek will enable MJ’s dream for a peaceful Congo to continue through the training and support of Congolese people. We also hope it brings more attention to what is happening in the Congo, where the greed of industrial countries for natural resources is helping to fuel long-term conflict and human rights abuses.”

Otto, a businessman and global entrepreneur based in Arcola, Illinois, says his friendship with John Sharp goes back to their days at Rosedale Bible College. Sharp, a retired history professor at Hesston College and his wife, Michele Miller Sharp, reside in Hesston, Kansas. The men were together in Illinois where Sharp was conducting historical research when the news came of the disappearance. Otto continued to support the family as the tragedy unfolded and through the ongoing investigations into the murders by the United Nations, the Swedish police, the FBI and investigative reporters.

The goal of climbing the mountain in honor of MJ emerged in late 2017 as Otto traveled back and forth on business trips to Tanzania, where he is involved in financing agribusiness aid efforts.

“Many of my friends were asking me about Tanzania and whether I had climbed Kilimanjaro yet, and I was talking about it with John and he said that was one of MJ’s dreams, that MJ had wanted to do it,” Otto said. “So then it was, ‘Let’s go, and let’s bring others who loved MJ and are inspired by him – and let’s raise some money for the scholarship.’”

Childhood friend and scholarship fund instigator Keith Grubaugh, of Vancouver, British Columbia, Canada, is an enthusiastic supporter of the trek. While visiting EMU during the October 2017 Homecoming and Family Weekend to be with Sharp’s parents as they accepted the EMU Life Service Award on their son’s behalf, Grubaugh met students and faculty at CJP.

“Meeting these students and learning about this program is what has motivated me to give as I can, as often as I can,” he said. “I believe we are all called to do our part in making a difference in the lives of those around us and I believe that is exactly what we are doing when we support this scholarship. We are helping to prepare a new wave of peacemakers that will come to EMU to learn the skills they need to go back out into the world and pick up the torch that my dear friend was carrying in his own special way.”

Among the trekkers are others who never met Sharp but are inspired by his life and legacy such as Fred Kniss ’79, EMU’s provost. Kniss has a personal connection to East Africa, having spent five years in Kenya coordinating Mennonite Central Committee and Eastern Mennonite Missions volunteers. But it was the similarities between Sharp and his own son, also named Michael, that touched his heart. The two Michaels were one year apart in age and both classmates and history majors at EMU.

“My son went on to study political violence and conduct fieldwork in Rwanda and Kenya and I at times feared for his safety,” Kniss said. “I have an enormous empathy for MJ’s parents and what they’ve gone through.”

‘The power of MJ’s story’

As word gets out and inquiries have increased about the trek, John Sharp says he has “ceased to be surprised by the power of MJ’s story to move and inspire people.”

But he says this trek is about much more than that. “It’s a story about peacebuilding and the need for nonviolent resolution in the DRC. We hope it will be a small step toward  bringing healing and shalom to the people of Congo.”

Sharp says the group plans to document the journey via Facebook posts – two EMU students, Christy Kauffman and Riley Swartzendruber, will be along to take photos and film – and “to share stories, laughter and tears along the way as we remember MJ.”

At the summit, Sharp said, the group will hold a small ceremony and “thank God for MJ’s life and ministry and the 34 years we had with him.”