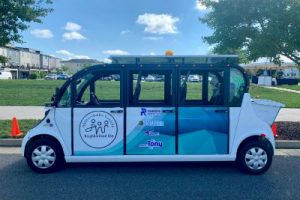 The Albemarle County Board of Supervisors reviewed a presentation on the outcomes of the public trial of the AVNU shuttle.

The pilot for AVNU – Autonomous Vehicle, Neighborhood Use –  was the first autonomous shuttle on public roads for the public’s use in Virginia. During the 90-day pilot, which operated in and around Crozet, over 530 miles were driven autonomously and 750 passengers rode in the shuttle.

The shuttle operated with an onboard safety ambassador, but during the pilot, there were no safety incidents and no interventions or safety disengagements occurred.

The county will use the findings of the pilot to inform future planning efforts, to accommodate autonomous vehicle technology in our community through opportunities for curb cuts, lane widths, and electric charging stations.

The partnership submitted a proposal to VDOT’s Innovation and Technology Transportation Fund to provide an autonomous electric transit on public roads for the public in others parts of Albemarle County.

“We demonstrated the viability of our technology by delivering what was a fully autonomous shuttle service on public roads for our neighbors here in Crozet,” said Paul Perrone, CEO and founder of Perrone Robotics. “Further, having the county support our efforts has opened doors for us with new customers, including a Fortune 50 logistics customer and a transportation authority that will be conducting a pilot and follow-on project that will be one of the largest public transit autonomous vehicle deployments in the US. The public pilot project and the awareness it generated has also helped in the development of a customer pipeline that is now in excess of $65 million.”

A link to the final report to Albemarle County can be found here: www.perronerobotics.com/county-shuttle-report.