The Nats, the World Series, ‘Seinfeld,’ and the free sub 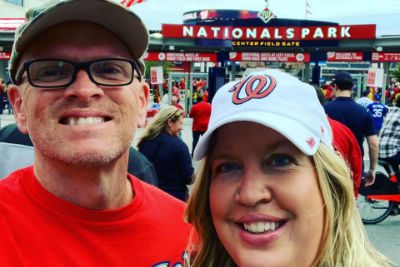 Nats fans, channeling Adam Eaton, are familiar with “Seinfeld” references, with his recent nod to George Costanza, and the concept of embracing the opposite.

How about this one, related to an Elaine Benes story arc involving her lost sandwich shop punch card …

“I’ve eaten 23 bad subs. I just need one more,” Elaine said, lamenting the loss of said punch card, which, at 24 subs, would earn her a free sub.

“I have spent a lot of time, and I have eaten a lot of crap to get to where I am today. And I am not throwing it all away now.”

And, there you go, Nats fans.

Your free sub is coming.

I became a Nats fan – not many of us were born Nats fans; none of us that can drive, anyway – when the team took fellow UVA alum Ryan Zimmerman with the fourth pick in the 2005 MLB Draft.

The Nationals had just moved to DC that spring, after MLB took over ownership of the Montreal Expos and, after exploring ceasing the team’s operations, planted the franchise in the old RFK Stadium, which we can now charitably refer to as a “dump.”

Zimmerman, who we now look at as the “Original National,” got called up that September, hit .397, and has been a fixture since.

His presence got me making regular visits from the Shenandoah Valley to DC, first to RFK, then Nats Park, which opened in 2008.

These teams were … bad. I remember Livan Hernandez as the #1 starter, a guy named Henry Rodriguez who could throw it 100 mph, but not in the strike zone.

Jayson Werth signed a free-agent deal in December 2010, and it felt like it was on from there.

A golden era of pain, that is.

We were still a week away, when I was in town, from “Baby Shark,” a couple of weeks away from even getting back to .500.

We all spent the rest of the summer and early fall watching scoreboards to try to will our team into at least a wild-card berth, maybe, somehow, catching the Braves in the East, to avoid the wild-card nonsense, understanding totally when Davey Martinez had the heart issues in the dugout at the end of the home Braves series.

Aside there: I’m a distance runner, normal resting heart rate around 45 bpm. Last night, during Game 4, I was over 100 bpm for a solid hour.

It was like I was running a 10K. And the Nats were winning all night.

The wild card, the NLDS win over the Dodgers, the NCLS sweep, it’s a dream now, except that it happened.

The World Series is to come. My wife and I have reserved a hotel room for the weekend, and are hoping we can get in for at least one of the games.

We’ve eaten a lot of crap to get to where we are today.

I want that sub.