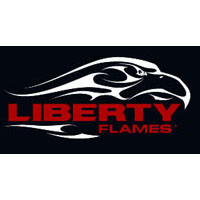 The hard-fought victory gave Liberty its first 10-game winning streak since the 2009-10 season. The Lady Flames are now 16-7 overall and 11-1 in Big South action, giving them a two-game lead over High Point in the conference standings.

Charleston Southern trailed by 13 points with 11 minutes remaining in regulation, before nearly pulling out a comeback victory. The Lady Buccaneers, who saw their three-game winning streak snapped on Saturday, dropped to 14-9 overall and 7-5 in the Big South. CSU has now lost its last 18 games at Liberty.

Charleston Southern had recorded back-to-back 80-point outings before Saturday, but it took the Lady Buccaneers 4:29 to score their first points at the Vines Center. By that time, Liberty had opened the game with an 8-0 run. Avery Warley keyed the early surge with a pair of layups.

The Lady Flames took their first double-digit lead at 16-5, when Devon Brown hit Liberty’s third triple of the early-going at the 11:59 mark.

Charleston Southern scored the game’s next four points, pulling to within 16-9 10:16 before halftime, when Anicia Dotson made a free throw.

Miller drained a three-pointer on Liberty’s next offensive possession, kick-starting a 7-1 run by the Lady Flames. Warley’s putback hoop 8:07 before halftime made the score 23-10, Liberty.

The Lady Flames still led 26-13, before CSU fashioned its best run of the opening half. Lakeitha Alston scored five points during a 7-0 burst, including a layup at the 3:34 mark which cut her team’s deficit to 26-20.

Liberty’s edge went back and forth between six and eight points for the remainder of the opening half, before the Lady Flames took a 32-24 edge into the locker room at halftime.

Liberty shot 50 percent (13-of-26) from the floor in the first half, assisted by 18 points in the paint and a dozen second-chance tallies. Meanwhile, CSU hit just 28.1 percent (9-of-32) of its first-half field goal attempts.

The homestanding Lady Flames dominated the rebounding category during the first 20 minutes, grabbing 27 rebounds to the Lady Buccaneers’ 12. However, Liberty committed 12 first-half turnovers which led to eight points by Charleston Southern.

Individually, Miller led Liberty’s offensive attack in the first half, making three triples as part of an 11-point period. Warley chipped in eight points and a half-high eight rebounds for the Lady Flames.

Alston played all 20 minutes during the first half for the Lady Buccaneers, pacing all players with 12 points before the break.

Charleston Southern scored five points during the opening minute of the second half, making it a one-possession game at 32-29, when Rachelle Coward nailed a three-pointer at the 19:23 mark.

But the Lady Buccaneers went more than six minutes without scoring another point, allowing Liberty to build its cushion to 38-29 on Miller’s layup at 13:36.

Liberty only managed one made field goal in the next five and a half minutes, during which CSU used four triples to fuel a 16-3 run. Coward knotted things up at 48-48 with 5:47 to play with a long three-pointer.

The Lady Flames went in front 52-48 on Miller’s contested layup at 4:02, but the Lady Buccaneers countered with an 8-1 surge. Coward punctuated the run with another triple, giving Charleston Southern a 56-53 advantage with 1:10 left on the second-half clock.

Just 17 seconds later, Brown found Miller on a skip pass and the freshman calmly sank the game-tying triple. Both teams misfired on shot attempts during the remaining time, sending the game to overtime.

Liberty held the lead for most of the first overtime, pushing its advantage to 66-63 on Brown’s pair of free throws at the 16-second mark. The Lady Flames then fouled Coward shooting a three-pointer, sending her to the charity stripe for three attempts. Coward hit nothing but net on all three tries, leveling the score at 66-66. Neither team got a shot off during the remaining four seconds, as Liberty headed to double overtime for the first time since a Jan. 6, 2004 contest at American.

Dale found the bottom of the net with her three-point try, just 28 seconds into the second overtime. Meanwhile, Charleston Southern went cold from the field. The Lady Buccaneers did not make a field goal in the second overtime until Coward hit a runner with 17 ticks left. But Liberty was still ahead 75-69 when Coward’s shot connected, and Dale made two free throws to provide the final margin of 77-69. It was Liberty’s first overtime victory since the previously-mentioned American contest from Jan. 6, 2004, which saw the Lady Flames prevail, 76-72, in double overtime.

For the game, Liberty shot 43.5 percent (27-of-62) from the field, as compared with Charleston Southern’s 31.9 percent (23-of-72) effort. The Lady Flames made seven three-pointers to tie their season high, while the Lady Buccaneers finished with 13 triples, equaling their total from the teams’ first matchup this season, on Jan. 16.

Liberty controlled the paint, doubling up CSU on the glass by a 60-30 margin and scoring 38 points in the paint to the Lady Buccaneers’ 16.

Miller played the most minutes of anyone, equaling Kristal Tharp’s school record from the Jan. 6, 2004 American contest with 48 minutes. The freshman made the most of her playing time, scoring a career-best and game-high 23 points and tying her career high with five triples.

Warley chipped in 14 points and 23 rebounds for her 10th double-double of the season. Her career-high rebounding total ties for third in program history. No Lady Flame had grabbed as many rebounds in a game since Dec. 4, 1992, when Theresa Bream collected 23 boards against St. Peter’s.

Brown also finished with a double-double, scoring half of her 12 points during the two overtime periods and adding 10 rebounds. The double-double was her second of the season and the 11th of her career.

Nine of Dale’s 12 points came during the pair of overtimes, and the senior also set a career high with seven assists. Omotola reached double figures for the second straight game, ending up with 11 points and nine rebounds for the Lady Flames.

Coward, who had scored 32 points the first time Charleston Southern played Liberty this season, was limited to one first-half point. However, she poured in 21 tallies during the second half and overtime to finish with a team-high 22 points.

Alston added 14 points and five assists for the Lady Buccaneers. Freshman Shannon Sanders also played an impressive game for coach Julie Goodenough’s squad. She scored 13 points off the bench, which was more points than the 11 she had recorded all year prior to Saturday.

Liberty will wrap up its quick two-game homestand Monday at 7 p.m., with a matchup against Coastal Carolina inside the Vines Center. The Lady Flames will seek their 37th consecutive victory in their all-time head-to-head series with the Chanticleers, after defeating Coastal Carolina by an 82-45 count Jan. 14 in Conway, S.C.

Charleston Southern will remain within the Commonwealth until Monday, when the Lady Buccaneers square off with Radford. Tipoff is slated for 7 p.m. inside the Dedmon Center.