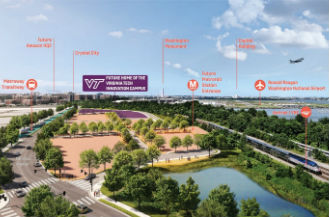 Construction of Virginia Tech’s Innovation Campus took an important step forward on Aug. 1. Representatives from about 175 firms crowded into a Crystal City conference room to hear details related to a public Request For Proposal to provide design services for the campus’s first academic building.

The university announced in June that it will partner with Lionstone Investments to build its Innovation Campus in Alexandria as part of a new 65-acre mixed-use development and innovation district in National Landing, just steps away from the future Potomac Yard Metrorail Station.

On July 11, the RFP to provide full design services for the first 300,000-square-foot building was issued. It was posted in the Washington Post legal ads and on the state’s procurement site.

“The establishment of an attractive sense of place, a place where innovation, creativity, and collaboration can flourish, is critical to the success of the Innovation Campus and the broader Innovation District,” according to the site design considerations stated in the RFP. “This requires a deliberate and well-thought-out approach to the public realm, both external and internal to the building, including gathering spaces on the ground level, exterior circulation areas, and landscape integral to the creation of the campus, all designed to promote engagement and interaction.”

Sherwood Wilson, Virginia Tech’s vice president for operations, kicked off Thursday’s meeting. He welcomed the interested firms and provided insight and background on Virginia Tech’s collaboration with the state’s Virginia Economic Development Partnership to envision the campus as part of the state’s bid to attract Amazon’s HQ2.

There were 232 individuals who signed in at Thursday’s meeting. In addition to architectural firms, the 175 represented companies included furniture vendors, engineers, and a few contractors. The attendees included a lot of Hokie alumni. About 75 hands went up when Wilson asked how many Virginia Tech graduates were in the room.

“The standing-room-only crowd today illustrates the engagement and excitement about this project,” he said following the meeting. “We look forward to reviewing the proposals and finding the right partners to help us carry out a transformational vision.”

Written proposals for design services are due Aug. 13, according to the RFP. Virginia Tech expects to award the design contract late this year. The building will be complete by 2024.

“The academic building is envisioned to be a part of an engagement ecosystem, providing spaces to connect Virginia Tech with its partners and community, such as through community spaces,” according to the RFP. “The building is to be infused with technologies to support programs within the building, campus, and district, as well as leveraging programs and people at other Virginia Tech locations throughout the commonwealth and globally.”

The first class of Innovation Campus master’s degree students will enroll in the fall of 2020 in existing space adjacent to where its new academic buildings will eventually be built. When complete in about 10 years, the campus will enroll 750 master’s candidates and hundreds of doctoral students and postdoctoral fellows.