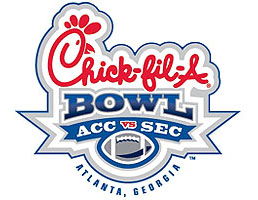 For the 15th consecutive year, a capacity crowd will be on hand to watch the nation’s oldest ACC vs. SEC rivalry bowl game. Chick-fil-A Bowl officials today announced the game between No. 25 Auburn and Virginia is sold out.

The Chick-fil-A Bowl’s string of sellouts is the second-longest among all bowls in the country, behind only the Rose Bowl.

“This is really a testament to the extremely high level of support that we’ve received by local fans, and ACC and SEC team fans who continue to embrace our game,” said Gary Stokan, Chick-fil-A Bowl president and CEO. “Atlanta is passionate about college football and is a hotbed for both conferences, making our annual match-up a perfect fit.”

Both Auburn and Virginia purchased their full ticket allotments from the Bowl following their bowl selections Dec. 4 and local and regional buyers purchased the remaining tickets through the Chick-fil-A Bowl office.

The Chick-fil-A Bowl is among the highest-attended non-BCS games in the nation with more than 2.4 million fans having attended the game over the last 43 years.