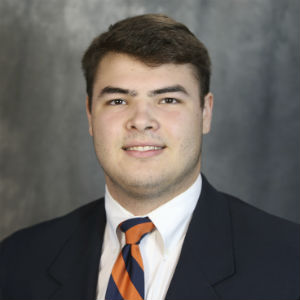 Eli Hanback is ready. As UVA football readies for the challenge of SEC foe South Carolina in the Belk Bowl, a pair of losses serve as extra motivation.

The first came nearly a year ago, in the Military Bowl, a 49-7 loss for the ‘Hoos in the program’s first postseason appearance in six years.

“We know the stakes and level we’re playing at. This year, going into a second bowl game, we’ve been really focused on our assignments, focused on our tasks,” said Hanback, a junior defensive tackle who led the guys up front with 42 tackles, and also had three tackles for losses, two sacks, two quarterback hurries and two fumble recoveries.

The defensive line will need to get pressure on South Carolina quarterback Jake Bentley, who threw for 2,953 yards and 27 TDs this season, while operating behind an offensive line that surrendered just 20 sacks.

“They have great receivers, a very good offensive line, so it’s going to be a big challenge for us to get pressure on the quarterback, a very capable quarterback,” Hanback said. “We know they like to throw the ball with the receivers they have out there to make plays. It is going to be a challenge for us, but it’s something that we’ve practiced and prepared for, and we’re all looking forward to the challenge.”

I mentioned that UVA is coming into this game feeling the sting of two losses. The one being last year’s bowl. The other, obviously, is the 2018 regular-season finale, the 34-31 loss at Virginia Tech.

Hanback and his teammates have been looking forward to this chance at redemption since Black Friday.

“That left a very, very bitter taste in everyone’s mouth, so the opportunity to have another game to play is awesome. I think it’s very encouraging and uplifting for everyone on the team,” Hanback said.

Column and interview by Chris Graham