Artists’ ideas about race in the 1940s: Professor to examine art during the desegregation movement 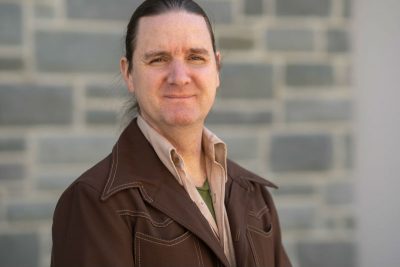 James Madison University professor of art history, John Ott, Ph.D., has been awarded a prestigious residential fellowship that will take place May through June.

Ott has been awarded a residential Paul Mellon Visiting Senior Fellowship at the Center for Advanced Study in the Visual Arts at the National Gallery of Art in Washington, D.C. He will work to develop a book manuscript “Mixed Media: The Visual Cultures of Racial Integration, 1931-54.”

“It is a true honor to have the opportunity to work among such a distinguished group of international colleagues,” said John Ott, Ph.D.

This project investigates black and white artists’ efforts toward racial integration, both in terms of imagery and within cultural institutions, from the infamous 1931 Scottsboro Boys trial until Brown v. Board’s 1954 desegregation of public schools.

Individual chapters of this project address images of racial solidarity in murals produced with New Deal arts programs, graphics commissioned by multiracial labor unions, Jacob Lawrence’s wartime paintings of the desegregation of the Coast Guard and efforts by black modernists to claim abstraction as an integrationist visual style.

“Mixed Media” has previously received the support of other highly competitive national awards, including a Smithsonian Postdoctoral Fellowship, a National Endowment for the Humanities Summer Stipend and an American Council of Learned Societies Project Development Grant.

Since 1979, the Center for Advanced Study in the Visual Arts has hosted leading international scholars. Ott will join researchers from other higher educational institutions such as Columbia, Duke, Harvard, The Metropolitan Museum of Art, UCLA and the University of Chicago, as well as international scholars from Berlin, England, Germany, Georgia, Russia, and Scotland.

For the latest news and information provided by James Madison University, be sure to follow @JMUNews.