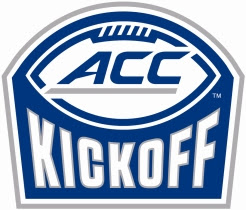 ACC Commissioner John Swofford looked ahead with excitement and anticipation on Sunday as he met with a record media contingent at the Atlantic Coast Conference’s 43rd annual Football Kickoff.

“The combination of the league’s 15 member institutions is remarkable, and this conference has never been stronger and better positioned,” Swofford said.

A three-year period of growth culminated with Louisville’s official entry into the conference on July 1.  The ACC Football Kickoff represents a friendly initiation of sorts, and Swofford expects the Cardinals to make a strong first and lasting impression as they begin full-scale league athletic competition.

“As I’ve said previously, Louisville brings to the ACC an institution and athletic program on a tremendous upward trajectory,” Swofford said. “It brings a dynamic city and a rabid, large and passionate fan base. Frankly speaking, I know of no other athletic program that has progressed as much as Louisville has in the last 15 years.”

Louisville will join an ACC that saw five teams win NCAA Championships during the 2013-14 academic year and placed at least one team among the top five in 14 of its sponsored sports. Nine ACC student-athletes claimed individual NCAA titles.

But Swofford made equal note of the conference’s collective academic accomplishments.

ACC football programs led all conferences for the eighth-straight year in the NCAA’s Academic Performance Rates (APR) and for the eighth time in nine years in the NCAA’s Graduation Success Rates (GSR). Overall, ACC member schools continue to lead the way among the Power 5 conferences in the latest US News and World Report Rankings of ‘Best Colleges,’ with over half of its membership among the Top 50 and five among the Top 30.

“Academically, I continue to be inspired by the student-athletes that attend our conference’s unique mix of public and private institutions,” Swofford said.

While applauding the successes of the past year and looking ahead to a promising ACC future, Swofford acknowledged that “there’s no overlooking the national discussions during this period of restructuring within college athletics.”

“I applaud the great efforts by Wake Forest President Nathan Hatch, who also serves as the chair of the NCAA Board of Directors in leading the membership throughout this process,” Swofford said. “The change that continues to be called for is key to ensuring that the model reflects the needs of the 21st century student-athlete, while also recognizing how special the collegiate model is to the educational system within our country.”

Swofford said the ACC, along with the Big Ten, Big XII, PAC-12 and SEC, will continue to prioritize the discussions surrounding the enhancement of the athletic scholarship, ensuring that student-athletes have every opportunity to earn a degree (even if they return to school following the completion of a professional career) and ensure that they have their health and safety needs met by the institutions they represent.

The issues of health and safety were addressed earlier Sunday, when the ACC announced an endorsement of the USA Football “Heads Up Program.” The partnership will entail league coaches participating in a public relations campaign to increase awareness at the youth football level.

The endorsement follows a meeting of ACC medical personnel last March to update and refine player safety policies. Consensus from those discussions was shared and discussed with the league’s football coaches at the ACC Spring Meetings.

“I think the work done by our membership this past year was terrific,” Swofford said. “There’s always an emphasis on prioritizing player safety, and this year allowed the ACC the opportunity to take a leadership role within the NCAA by taking an active role and officially endorsing the new guidelines just recently announced.”

Swofford said the ACC also put forward three requests to the NCAA rules committee asking for the ability to expand the use of technology in practices and games for player-safety data collection purposes. The NCAA approved a player monitoring system for ACC games this fall.  The ACC’s two other requests – experimentation with a helmet camera during completion and the use of a coach-quarterback communication – will be discussed by the NCAA Football Rules Committee next February.

Many media on Sunday were focused on the upcoming football season. Swofford was more than happy to take part in that discussion, particularly with the ACC coming off a 2013 season that featured Florida State’s national championship, an NCAA-record 11 ACC teams in bowl games and 11 league teams with winning record.

The ACC’s 14 football programs seek similar success in 2014, but Swofford noted that it will be hard-earned.

“No ACC team will face fewer than six opponents that participated in bowl games last year, while 11 of the 14 ACC teams will play at least eight bowl teams from 2013, with both Miami and Virginia each facing 10 teams that were in postseason play a year ago,” he pointed out. “Our teams will also play 24 nonconference games against teams that participated in bowl games in 2013, which ties for most of any Power 5 Conference.”

As has been the case in recent years, there will be no shortage of fan access to those matchups.

“We are extremely pleased that every ACC controlled football game will be available to our fans nationwide,” Swofford said. “Our relationship with ESPN allows us to maximize our reach and bring ACC football and content to fans whenever they are across a multitude of devices. Whether traditional television or national digital and mobile platforms like ESPN3 and Watch ESPN, ACC content is truly available everywhere.

“In addition to ESPN, the ACC Network through Raycom continues to be broader than ever before, with a reach of over 90 million households and no geographic parameters on the distribution.  The ACC Network is available in each of the top ten television markets within the US, and in 21 of the Top 25.”

Following this year’s regular season, the ACC Football Championship Game will return to Charlotte’s Bank of America Stadium for the fifth consecutive year, and is set to remain at that venue through 2019. The ACC will be represented as one of the Power 5 conferences in the new College Football Playoff while continuing its long-time partnership with the Orange Bowl as part of the new postseason format.

“We couldn’t be more pleased with the future line up of bowl games including many long-time partners and some new ones too,” Swofford said. “Overall, these outstanding partners provide more postseason opportunities, selection flexibility, improved financials, marquee matchups and attractive destinations for the ACC’s teams, fans and alums.”