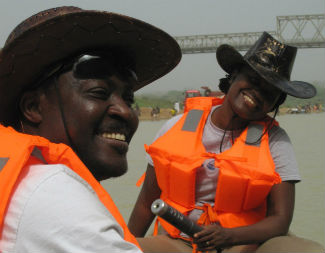 Graduate student Gifty Anane-Taabeah (right) measures water quality and collects fish samples with her advisor Emmanuel Frimpong, an associate professor of fish and wildlife conservation in the College of Natural Resources and Environment, in the Oti River, which is part of the Volta River basin in Ghana. Photo courtesy of Gifty Anane-Taabeah.

In Ghana, experts suspect that some fish farmers have started to raise unapproved, controversial strains of the Nile tilapia Oreochromis niloticus that have the ability to grow quickly on their farms.

A Virginia Tech graduate student seeks to establish which strains farmers are growing in the country, and whether these include the unapproved strains of genetically improved farm tilapia (GIFT).

The escape of farm fish into nearby rivers and streams is a common phenomenon due to poorly secured fish holding facilities and frequent storms.

Farmed fish can be as much as 50 percent less genetically diverse than wild fish, according to Anane-Taabeah. A genetically diverse fish population is an enduring one, able to withstand environmental stressors like disease, climate change, and pollution.

“We want to know if there is significant mixing going on, and if so, how we can lessen the impact and protect the environmental while also growing the aquaculture industry,” said Anane-Taabeah.

Tilapia is a potential umbrella species in Ghana, serving as one of the country’s primary food sources. A popular way to raise fish is through cage farming, a technique that involves placing floating cages in public freshwater bodies.

In the Volta Lake region of Ghana, cage farming of tilapia developed quickly between 2010 and 2014 as a commercial activity, with an average annual growth rate of 50 percent.

To assess the effect of aquaculture on the genetic diversity of natural tilapia populations, Anane-Taabeah is conducting a pilot study with selected hatcheries and cage farms in the Volta Lake region of Ghana.

Between March 2015 and July 2017, she sampled the Volta River basin in Ghana to obtain fin clips from wild and farmed tilapia. Using DNA extracted from the fish samples, Anane-Taabeah will employ highly variable molecular markers including nuclear microsatellite DNA and mtDNA sequences from the D-loop region and the ND1 gene to characterize the fish populations and assess the level of genetic mixing between farmed tilapia and natural populations.

In May 2018, she will share her findings with stakeholders including the Ghanaian Fisheries Commission, the Ministry of Fisheries and Aquaculture Development, and the Ghanaian Environmental Protection Agency.

Anane-Taabeah is an Assistant Lecturer in the Department of Fisheries and Watershed Management at the Kwame Nkrumah University of Science and Technology in Ghana, and currently on study leave for doctoral studies. She was a master’s student in the Department of Fish and Wildlife Conservation at Virginia Tech from 2010 to 2012 and returned to start her doctoral studies in 2015.

“Of the many aquaculture development constraints in sub-Saharan Africa, a lack of appreciation for genetic resources management and weak biosecurity policies among countries is most critical in the face of the compounding problem of changing climate,” said Emmanuel Frimpong, Anane-Taabeah’s advisor and an associate professor of fisheries in the College of Natural Resources and Environment. “Gifty’s research will not only fill a current void in our understanding of aquaculture impacts and tilapia conservation needs, but also her training in modern genetics technology at Virginia Tech is a real boost of expertise for aquaculture and conservation management in Ghana and the sub-Saharan Africa region.”

“Gifty’s work will open our eyes to the patterns of natural genetic variation among Ghanaian tilapia populations and to any threats to local adaption due to poorly confined aquaculture activities,” said Eric Hallerman, Anane-Taabeah’s co-advisor and a professor of fisheries in the College of Natural Resources and Environment.

The Rufford Foundation, a U.K.-based charity that funds nature conservation projects across the developing world, recently provided a grant to support Anane-Taabeah’s project, and she continues to partner with the Fisheries Commission in Ghana.

She was previously supported by USAID’s AquaFish Innovation Lab.