Rob Moss of Tazewell County has endured his share of run-ins with coyotes.

“Coyotes kill our lambs and sometimes our adult sheep,” Moss explained. He added that he can tell if an animal was killed by a coyote because of the canine tooth marks on the neck of the carcass. “Usually the lamb will be split open and the liver, lungs and heart are eaten. The rib cage is split with surgical precision.” 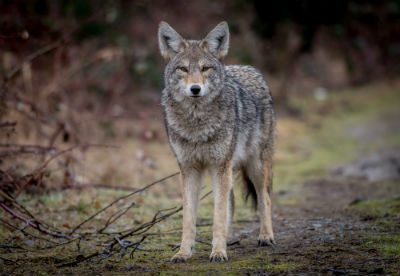 He said he’s experienced packs of five or six coyotes at night going after sheep. Fox said he tries to educate landowners on what to do when they encounter a coyote. He recommends improved fencing with woven wire.

Snares are also successful, and guard dogs, donkeys and llamas are sometimes helpful if they are well-trained. Fox recommended asking neighbors and professional trappers to help with coyotes.

Moss said he’s found trapping to be most successful in dealing with coyotes, but he has killed only a few.

“We have killed 20 coyotes since Jan. 1, and that hasn’t solved the problem. Even when we bring the sheep in closer to the barn, we still have kills,” he said. “We’ve tried donkeys and Pyrenees dogs, and neither have offered protection. We also have an electric fence, but even the sheep won’t stay off of it.”

Moss said his neighbor owns over 300 sheep and estimates they trapped more than 60 coyotes last year within a 10-mile radius of Witten Valley where they live. “There’s a bounty on coyotes in Tazewell County, but I don’t participate.”

Keeping predatory animals away from livestock can be a challenge.

“The economic losses and setbacks farmers face when trying to protect their livestock from opportunistic predators such as coyotes can be extremely frustrating,” shared Stefanie Kitchen, assistant director of governmental relations for Virginia Farm Bureau Federation, who specializes in helping Farm Bureau producer members with wildlife issues. “Resources, like USDA Wildlife Services staff and helpline, are available to producers in need of management assistance.”

In fiscal year 2018, the Virginia Wildlife Conflict Helpline received 580 phone calls concerning coyotes, which are the sixth most-reported species. Anyone experiencing a wildlife concern should contact the helpline at 855-571-9003.