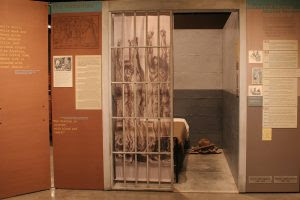 The Voices of Conscience exhibit includes a recreation of an Alcatraz prison cell where conscientious objectors were punished.

An exhibit and guest speakers at Eastern Mennonite University this fall will highlight the stories of conscientious objectors (COs) in World War I.

“Voices of Conscience: Peace Witness in the Great War” will be open at the Hartzler Library during regular library hours Oct. 1 – Nov. 17.

The exhibit “lifts up the prophetic insights and the personal courage of World War I peace protesters, and suggests parallels to the culture of war and violence in our world today,” according to its website. Motivated by a variety of reasons both religious and secular, resisters of U.S. involvement faced humiliation, imprisonment and violence.

“The Great War sucked a generation of life out of Europe, and called into question the West’s self-perception as enlightened and progressive,” library director Marci Frederick said. “Many of today’s issues – massive human displacement, race-based nationalism, the economic costs of war, and colonialism – first came into focus during the first World War. Among those issues was the question of how Christians would respond to government commands to kill, including the killing of other Christians. This exhibit confronts us with that question, too.”

Developed by the Kauffman Museum in North Newton, Kansas, the exhibit is on a seven-states tour. Its 10 themes are presented with text and quotes, large-scale graphics and photomurals surrounding a recreation of an Alcatraz prison cell where conscientious objectors were punished.

A related display showcases materials from EMU’s Archives, including papers and photos from eight conscientious objectors relating to their conscription, time spent in military camps, work during the war, and their discharge. Included Virginia Mennonite Conference Archives materials highlight the trial of Rhine Benner and L. J. Heatwole, charged under the Espionage Act of 1917 after telling congregants not to buy U.S. bonds and War Savings Stamps.

“People often hear only the experiences of COs who were from the Historic Peace Churches, and they are usually filtered through the perspective of an historian,” Yoder said – whereas learning through primary documents can bring to light additional complexities in their varied experiences.

“It is important to me that we tell the whole story,” she said. “Then everyone is recognized who took a stand for the cause of conscience, and, hopefully, young people today are encouraged to realize that they, too, have a right to conscientious objection – whether for religious or other reasons – and a responsibility to be speaking out against, or thinking at least about the evils of war.”