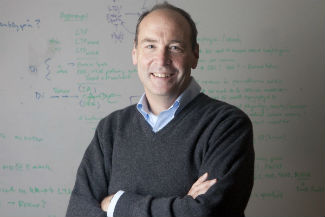 Neuroscientist Mark Bear, the Picower Professor of Neuroscience with the Department of Brain and Cognitive Sciences at the Massachusetts Institute of Technology, will open the 2017-2018 season of Virginia Tech Carilion Research Institute’s Distinguished Public Lecture Series on Thursday, Oct. 19.

A renowned neuroscientist who focuses on how new experiences trigger the brain to modify its own form and function — known as brain plasticity — will talk about fragile X syndrome and related developmental brain disorders at 5:30 p.m. on Oct. 19 at the Virginia Tech Carilion Research Institute (VTCRI).

Mark F. Bear, the Picower Professor of Neuroscience with the Department of Brain and Cognitive Sciences at the Massachusetts Institute of Technology, will open VTCRI’s eighth annual Distinguished Public Lecture Series. His presentation will explore the possibility of new treatments for people with fragile X syndrome and related disorders.

The Distinguished Public Lecture Series is sponsored by VTCRI and the Translational Biology, Medicine, and Health Graduate Program of Virginia Tech.

Bear’s talk, “A Path from Genes to Treatment of Fragile X Syndrome and Related Developmental Brain Disorders,” will focus on his research of the molecular mechanisms underlying the genetic disorder and how that information may translate to patient treatment.

Bear studies synaptic plasticity, which is change that occurs at the connections between brain cells called neurons.

Fragile X syndrome is the most common single gene cause of inherited intellectual disability and autism spectrum disorder. Synaptic function, including the plasticity process, is disrupted in several psychiatric and neurological disorders — including Fragile X syndrome.

“We can exploit knowledge of neurobiology to repair genetic disorders of brain development,” Bear said. “Fragile X syndrome is often called the most common heritable cause of autism, because everyone with Fragile X syndrome will fall on the spectrum, and a third will get the full diagnosis of autism.”

“Our overarching interest is in the question of how experience and deprivation modify synaptic connections in the brain,” said Bear, who has been a Howard Hughes Medical Institute Investigator for more than 20 years.

Bear is a recipient of the ISPEN Foundation Neuroscience Prize, the FRAXA Research Foundation Pioneer Award, and the Ray Fuller Award of the American Society for Pharmacology and Experimental Therapeutics.

“Dr. Bear is one of the world’s most influential neuroscientists who has published foundational research on understanding synaptic plasticity in the brain, the effects of early life experience on brain development, and the underlying cellular and molecular processes that mediate learning and memory,” said Michael Friedlander, the executive director of VTCRI and Virginia Tech’s vice president for health sciences and technology. “Most recently, he has applied the principles obtained from these studies to understanding developmental disorders that affect cognition and developed potential therapeutic interventions for treatment. His work on fragile X syndrome, a type of autism spectrum disorder, both in the laboratory and in clinical trials, has been pivotal in advancing this field by translating rigorous scientific inquiry into the development of strategies for clinical care.”

The Distinguished Public Lecture Series brings the world’s leading medical researchers and scientific thought leaders to Roanoke as part of the Virginia Tech Carilion Research Institute’s mission to engage the community in the excitement and promise of scientific research. The free lectures are open to the general public as well as to Virginia Tech and Carilion faculty, students, and staff.

“We’re delighted to be able to share the insights of such highly sought-after experts in such a range of fascinating topics.” Friedlander said. “We’re also very proud to introduce these speakers to the blossoming partnership that Virginia Tech and the Carilion Clinic have forged for bringing the future of medical science for better health to the Roanoke region, the commonwealth, and the nation.”

A brief reception will precede the lecture.