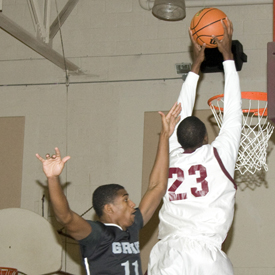 A Travis Hammonds three-pointer with 4.2 seconds left brought Gray Military Academy all the way back from a late 12-point deficit and lifted the War Eagles to a thrilling 100-99 upset of sixth-ranked Fishburne Military School Friday night.

The teams traded big bucket after big bucket down the stretch. Tied at 97 with 19.9 seconds left, Chase Cormier was fouled in the backcourt on an inbounds play, but missed both ends of the two-shot foul. Barnett Harris grabbed the miss on the second shot and sank the putback to give Fishburne a 99-97 lead.

Coach Ed Huckaby called timeout to set his defense, and said after the game that he expected Gray to go for the three and the win.

“We were ready for what they were going to do. We just didn’t make the play. Give Gray credit. They made the plays when they needed to. They deserved to win this game,” Huckaby said.

After the Hammonds three, Fishburne had to inbound the ball without the benefit of a timeout. Kuran Iverson was able to get a runner in the lane up toward the rim as time expired, but the ball rolled off, and Gray celebrated the upset.

“Like Coach said after the game, this was their Super Bowl. We’ve just got to go out and be ready to play tomorrow,” said Zach Lewis, who scored a season-high 32 points in the loss.

“I was just looking to get a shot up. I got a good look. It just didn’t fall,” said Iverson, who scored 15 points, but struggled with his shooting at times in the defeat, missing three first-half free throws en route to going 4-for-7 from the line on the night.

Fishburne concludes play in the Best Western Waynesboro Caisson Shootout on Saturday at 2 p.m. in a game against third-ranked Kiski School, an 84-79 winner over Miller School on Friday.