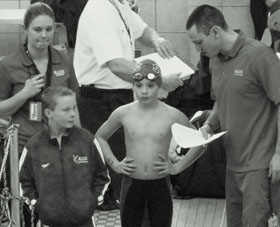 The Waynesboro Y Swim Team (the Shenandoah Marlins Aquatic Club, SMAC) traveled to the University of Maryland Jan. 8-9 to compete against all of the Northeast YMCA swim teams.

So many best times at a meet at this time in the season bodes well for SMAC for the upcoming short course (25-yard pools) championship meets starting in late February and continuing through early April.

SMAC had 14 swimmers finish in the top 10 of at least event. The swimmers were:

For more information regarding SMAC swimming, contact coach Norm Wright, director of competitive swimming at the Waynesboro Y, at 540.942.5107 or e-mail him at normw@smacswimming.org.

For more information about SMAC, go online at www.smacswimming.org.