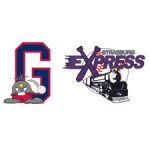 Jacob Hoyle and Jeff Conley each hit their first home runs of the season, but another first – Seth Lucio’s first rough innings of the summer – pushed the Waynesboro Generals to a 6-3 loss at Strasburg Friday night.

Lucio (2-1) had entered the game having allowed just one earned run in 18 innings, but Strasburg doubled that output in the first inning Friday night, as two hit batters, a walk, a single and a sacrifice fly gave the Express an early 2-0 lead.

Hoyle responded in the second with his first homer of the season, and when Conley added a two-run shot in the fourth, Waynesboro was up 3-2.

That was all the offense on the night for the Generals, though, and Strasburg chased Lucio in the seventh with back-to-back two-out RBI hits by George Smith and Terry McClinton to go up 4-3.

The Express added two insurance runs in the eight on an RBI single by Billy Motroni.

Waynesboro was able to bring the tying man to the plate with two outs in the ninth, but Brandon Murray grounded out to second to end the game.

Waynesboro (12-5) maintains a one-game lead in the South Division.