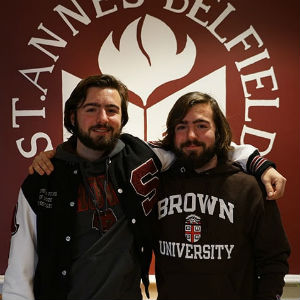 According to its website, Questbridge “is a powerful platform that connects the nation’s brightest students from low-income backgrounds with leading institutions of higher education and further opportunities … By facilitating these exchanges, QuestBridge aims to increase the percentage of talented low-income students attending the nation’s best universities and the ranks of national leadership itself.”

“We are incredibly proud of Miguel and Andreas’s academic achievement in being selected as St. Anne’s-Belfield School’s first ever QuestBridge scholars,” said parents Christina Rivera and Chris Young.

“Our family was overjoyed when they were both accepted, through the QuestBridge program, to Brown University with full-ride scholarships… The QuestBridge program means they will have the resources to attend one of the finest Ivy League universities in the nation, something our immigrant and farm family grandparents could only imagine. They will have the opportunity to be challenged, grow, and explore as young men of curiosity and community, characteristics honed during their time at St. Anne’s-Belfield.”

Via QuestBridge’s Match program, the Rivera Youngs were granted early admission to Brown University and each awarded a full, four-year scholarship. In addition to covering tuition and fees, the scholarship also covers room and board, books and supplies, and travel expenses. In receiving their awards, the brothers became two of 22,000 finalists to date to be admitted to college partners via QuestBridge.

“We ranked our schools differently… it wasn’t originally our intention to both go to Brown,” explained Andreas. “We looked at all of the mathematical statistics and everything and we just figured it was almost impossible that we would go to the same place.”

For Andreas, a visit to Brown led to him admiring how the students he encountered were involved in much more than just their classes. For Miguel, the open curriculum and city of Providence, RI were huge draws. Both remain undecided on what they will ultimately study.

“It’s encouraging to me that we were the first QuestBridge Scholars the School’s ever had,” said Miguel. “The fact that it was possible for us to do that is something I feel very proud of.”

“I’m always very grateful for the School and what it has done for me,” added Andreas. “I think without it I would not be on the same path as I am now.”