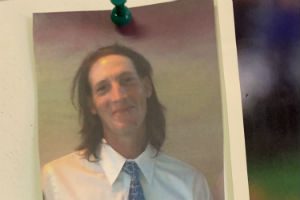 Shenandoah University and Sodexo are honoring a former Sodexo employee and Winchester Rescue Mission resident through a food partnership program.

Through the Chris Scruggs-Sodexo Memorial Partnership, Sodexo—the food services company contracted by Shenandoah—will send some of its excess food to the Winchester Rescue Mission, a men’s homeless shelter located on Cameron Street.

Scruggs, who died on April 1 while in his mid-40s, lived at the mission and was a full-time dishwasher for Sodexo in Shenandoah’s Allen Dining Hall for about four years. He helped start the relationship between Sodexo and the mission, and soon after, whenever there was extra food, Sodexo would send it to the mission with Scruggs.

“He went out of his way every day to make everyone he came in contact with feel special,” said Sodexo General Manager Peter Labrecque. “I think he touched a lot of people that way. He took it a little farther when he found a soul in need.”

Through the new partnership, Sodexo will continue to donate some of its overproduced food from the Shenandoah dining hall to the mission during the week and on holidays, spring break and during the summer. Excess food from catered university events will also be donated. The partnership will also continue to offer job opportunities for selected mission residents interested in working for Sodexo.

Scruggs is remembered as a dependable, dedicated worker who was proactive in helping out everywhere he went, often without being asked. His extra efforts ranged from taking out the trash at work, to setting up chairs at church, to greeting people when they arrived at the mission. Scruggs always made a point to ask about everyone’s family, and although he helped others in need, he never asked for anything in return.

Scruggs loved both the Winchester Rescue Mission and Shenandoah, according to mission Executive Director Brandan Thomas.

“He was one of the sweetest spirits you ever met,” Thomas said. “He was an incredible dude. One of those guys more concerned about you than himself. This ultimately led to some of the struggles he had because he was so focused on other people.”

When Thomas first started at the mission, there were some nights they didn’t have enough food. The partnership that Scruggs helped create between the mission and the university helped ease this problem.

“Shenandoah is constantly providing food for us,” Thomas said. “It saves us a lot of time. It’s stuff we don’t have to cook. We just have to warm it up.”

“For Sodexo, feeding the hungry is a corporate pillar,” Labrecque said. “It’s pretty important to us as local outreach in the community.”