Generals rally from seven down to stun Rockbridge, 10-9 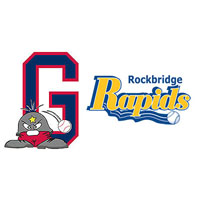 Michael Katz stepped up to the plate in the bottom of the 10th inning having gone 0-for-5 on the night.

A swing, a mighty home run that ranks among the longest ever hit at Kate Collins Field, and he strode back across the dish a game-winner.

“I was just trying to get a single, get on base. I wasn’t trying to do anything like that,” said Katz, a William and Mary freshman who earlier in the day was named to the Louisville Slugger Freshman All-America team along with teammate and Western Carolina product Jacob Hoyle.

Katz rode a 1-1 fastball from Kevin McCulloh (0-1) over the tall trees standing behind the center-field fence to propel the Generals to an improbable 10-9 victory over Rockbridge.

It was improbable because the Rapids had taken a 9-2 lead into the bottom of the seventh, when Waynesboro pushed across a seemingly insignificant run when Devin Smith scored on a passed ball to make it 9-3.

The Generals scored four runs in the eighth to set the stage for a two-out ninth-inning rally that brought the game back to even at 9-9 on a two-run single off the bat of Caleb Palensky.

The victory evens Waynesboro’s record at 2-2 on the young 2012 season and serves as a bit of a confidence boost given the nature of what happened.

“We’re never out of a game. We’ve got some guys who can crush the ball, so I don’t think you can ever count us out,” said Palensky, a sophomore from Nebraska-Omaha.