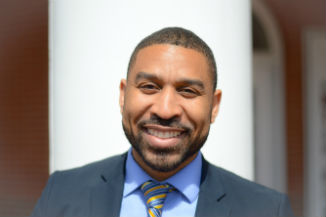 “I am truly honored to have been appointed to this inaugural role at Mary Baldwin,” said Jones, who joined MBU earlier this month. “When I first came to campus to interview, I immediately sensed that there is a level of interconnectedness among campus stakeholders and a strong devotion to the success of the students and the institution.”

Jones began his career as program coordinator for Greek Life at George Washington University, where he assisted with the organization and execution of Greek Life programming and designed major event programming for the Multicultural Greek Council. From there, he moved on to successful roles within student engagement at Purdue University, Fairleigh Dickinson University, Rensselaer Polytechnic Institute, and Morehouse College. Jones comes to Mary Baldwin from Bucknell University, where he served as associate dean of students for living, learning, and leadership.

At Bucknell, Jones built a cohesive team of 17 staff members while providing oversight to such areas as residential education, housing services, and first-year experience. He also supervised programs including room selection, fraternity and sorority recruitment, and new student orientation. In his wide-ranging role, Jones was responsible for a $2 million budget and financial planning process for each area of living, learning, and leadership.

Jones’ extensive experience makes him an ideal fit for a university undergoing a renaissance in multiple areas. Fittingly, a major feature of what attracted him to the position was the same culture of family that draws so many students to Mary Baldwin.

“The common phrase I heard was, ‘We are so happy that you are here,’” he said. “To hear that phrase from multiple people, including the president of a university, was very touching. It really spoke to the intimacy of the campus, which connects to my leadership and engagement style.”

Jones views building relationships with students as a primary goal of his new position.

Connecting young men and women with a vibrant and diverse student body does more than prepare them for the future, it helps them fully embrace the college experience.

“As a relational leader, I thrive in environments where I am able to cultivate authentic and meaningful relationships,” he said. “At Mary Baldwin, I will be able to use my talents to build synergies across internal and external stakeholders to create a premier experience that challenges students to recognize their skills and talents, and how they can maximize them to achieve their goals.”

Jones earned a bachelor’s degree in sociology and American studies from the University of Virginia, and a master’s in higher education administration from George Washington University. He is currently working toward his doctorate in student affairs leadership from the University of Georgia. For now, his focus is squarely upon preparing for the upcoming academic year.

“I look forward to engaging with everyone,” he said, “especially the amazing students, to learn about their stories, goals, dreams, and what I can do to enhance their experience.”