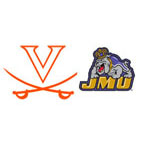 The Virginia baseball team scored nine runs in the fourth inning in rolling to a 15-5 victory over James Madison Wednesday evening at Davenport Field. UVa sent a dozen batters to the plate and hit a pair of home runs in the nine-run outburst.

UVa starting pitcher Kyle Crockett (So., Poquoson, Va.) overcame a rocky first inning to throw 4.0 innings and earn the win to improve to 2-2 this year. Crockett gave up two first-inning runs but rebounded to shut the Dukes out over the next three frames while facing the minimum nine batters.

JMU (6-22-1) grabbed the early lead with two runs in the first inning on a Ronnie Shaban RBI single and a Cole McInturff grounder. UVa got a run back in the second on a Harrington single to plate King, who led off with a walk.

UVa matched its largest single-inning output of the season by scoring nine times in the fourth. UVa also scored nine runs in the sixth against Monmouth on Feb. 24.

The first four batters reached against Slogik before Aaron Hoover entered the game. King was hit by a pitch to lead off and scored when Derek Fisher (Fr., Rexmont, Pa.) ripped his league-leading seventh triple. Harrington then followed with a home run to left-center to push UVa ahead, 4-2. With runners on first and third against Hoover, Werman laid down a perfect safety squeeze, with Nate Irving (Fr., Yonkers, N.Y.) scoring.

UVa loaded the bases with one out on a Branden Cogswell (Fr., Ballston Lake, N.Y.) bunt single before Stephen Bruno (Jr., Audubon, N.J.) hit a two-run single and King ripped the following pitch into the bleachers in left-center for a three-run blast. It was King’s third homer of the year, and it stretched UVa’s lead to 10-2.

Virginia added three runs in the sixth against reliever Trent Cundiff. UVa got back-to-back RBI singles from Fisher and Harrington before Irving lifted a sacrifice fly to right.

UVa posted a pair of runs in the seventh inning to push the lead to 15-2, with the first coming on a pinch-hit single by Kenny Towns (Fr., Burke, Va.) and the second on a JMU error.

JMU got a run in the eighth on a Hoover double and added two runs in the ninth inning on a Virginia error.

The Cavaliers continue their homestand this weekend as Wake Forest visits Davenport Field for the first time since 2008. The three-game ACC series begins at 4 p.m. Saturday. Game 2 is set for 1 p.m. Sunday, and the series culminates with a 7 p.m. Monday game that will be televised nationally on ESPNU as part of the network’s ACC Monday package.