Time to deprogram from the cult of national unity 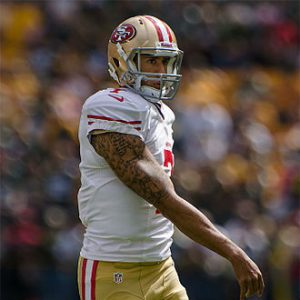 People don’t like seeing their gods blasphemed, and the backlash against Colin Kaepernick’s refusal to stand for the national anthem has revealed the completely religious nature of American patriotism.

Tomi Lahren, whose views on racial matters are about what you’d expect from a “conservative commentator” on Glenn Beck’s TheBlaze, has been on a nonstop outrage jag ever since Kaepernick’s stance made the news. As the protest movement of variously sitting, kneeling and raising fists during the national anthem has spread, Kate Upton has joined Lahren’s social media campaign to make football games a safe space for hyper-sensitive patriots. The complaints, predictably, reached fever pitch on 9/11. Upton responded to the decision of several Dolphins to kneel during the anthem by chiding: “You should be proud to be an American. Especially on 9/11 when we should support each other.” The most egregious comments though, which get right to the heart of the national unity cult, came from Lahren: “We aren’t white & black, we are red, white & blue.” “[W[e are Americans and we stand together.”

Howard Zinn ably deconstructed this idea that our common identity as Americans is somehow more important than race or class differences:

“[Our present leaders] bombard us with phrases like ‘national interest,’ ‘national security,’ and ‘national defense’ as if all of these concepts applied equally to all of us, colored or white, rich or poor, as if General Motors and Halliburton have the same interests as the rest of us, as if George Bush has the same interest as the young man or woman he sends to war.

The cult of national unity is an old one, and it exists for a reason. It dovetails with, and reinforces, a number of other patriotic American myths. Among them is the myth of “American Exceptionalism” — i.e., that America is the uniquely “indispensible nation” in promoting “peace and freedom” around the world, and is entitled to maintain military forces larger than the rest of the world combined, and unilaterally define as a “threat” or “aggressor” any country that defies American dictates, because of this beneficent role.

Another myth associated with the cult of national unity is the American Dream. We see this in the belief by the majority of Americans that they are “middle class.” The myth encourages Americans to believe that wealth is just a matter of hard work and ingenuity, and to identify with the “53%” of “taxpayers” and “makers vs. takers” against class warriors like Occupy, in the belief that someday they too may hit it big.

It also commonly appears in conjunction with the cult of The Troops as guarantors of “our freedoms,” as illustrated by Upton’s Instagram comments on 9/11. The anthem, she said, “represents honoring the many brave men and women who sacrifice and have sacrificed their lives each and every single day to protect our freedom.”

All this despite the hard realities that America’s wars have been overwhelmingly fought to secure capitalist access to the land, natural resources and markets of the world, and the rich get the great majority of their wealth by extracting rents from the rest of us with the help of the state.

America is “exceptional” among the developed Western nations in that it is the world’s biggest settler state, created by European colonists supplanting and exterminating the indigenous population on a continental scale, and in the role that slavery played in building our economy. It is exceptional, probably not unrelated to the previous fact, in the size of its prison system and the way its culture glorifies police and soldiers. It is “exceptional” only to the extent to which its people have been successfully inculcated with myths of a “Shining City on a Hill” and a “Classless Society.” These myths obscure the criminal reality of America’s role in the world; America’s reality is hidden behind the official idealistic facade.

Thanks to this whole complex of quasi-official ideologies, America has attained the unique status of global enforcer of class rule. It is equally unique in concealing the very existence of class conflict from a significant part of its domestic population.

Fortunately, as evidenced by the rise of Occupy and Black Lives Matter, and the protest movement inspired by Kaepernick himself, the spell of this patriotic cult is wearing off. Power, ultimately, depends on consent. And consent depends on deception and ignorance. Once people begin to see through its legitimizing ideologies, the system of power is doomed.