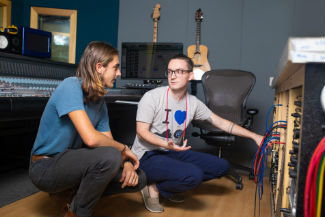 Eastern Mennonite University students wanting to learn about recording music can now apply to intern at a professional recording studio in Harrisonburg.

“We are committed to helping our music students meet all of their goals,” said professor of music David Berry. “The technology and processes of recording are part of the art of music, and so this partnership with a professional studio is us taking our commitment to the next level.”

The students will be involved in both administrative and sound engineering aspects of the studio’s operations, from meeting with artists and giving tours to setting up equipment for sessions or making edits to the final product and other tasks, said Lexington Bowler, studio manager and a former intern at Blue Sprocket.

“If I want to be involved in music, this is something that I should have some knowledge of, at the very least,” said EMU senior and Blue Sprocket summer intern Joseph Harder. A drummer, he first became connected with the studio when his band Willow Run recorded their EP Indigo there last year. “Pretty much anything that’s happening [in the studio], I’m welcome to sit in and figure out what’s going on, which has been really cool.”

The internship arrangement is part of EMU’s music program, which has been long recognized for its choirs and orchestra but is also nimble enough to custom fit students’ interests in a “whole range” of music, from bluegrass to hip hop, Berry said.

“A lot of times at a music school there’s not a place for students with eclectic tastes, and so their nontraditional tastes are just something they can try to fit in on the side,” he said. “Because EMU’s music program is small, we also have flexibility and the ability to tailor our program to the interests of people who might not fit into a more traditional program. We want you. We want you to come here.”

To showcase the studio internship option, EMU students will be invited to a studio tour hosted this fall by the new campus club The Composer Collective, which invites guest artists and collective members to talk about their creative processes and works. All EMU students are invited on the tour, which will highlight the studio’s equipment and infrastructure, as well as describe the roles of people involved in a project.

“The music process is really about collaboration,” Bowler said.

In the spring semester, the studio will also give an interactive presentation to Berry’s class “Folk-Rock to Hip-Hop: A History of American Popular Music.”

“The recording process is as much a part of music history as what kinds of songs people were writing,” Berry said. “It’s part of every kind of contemporary music and has changed the way people write songs. It has even played a role in determining accepted song lengths.”

At once ‘homey’ and ‘world class’

Bowler said the EMU arrangement provides a unique – and “awesome” – opportunity for students in a “world class” space. At once serious, quirky, industrial and comfortable, the studio boasts a great room, multiple isolation booths and mobile isolation panels. In the control room, artists can monitor sessions on tall chairs at a concrete-topped work table. Instruments and eclectic art decorate the walls; bicycles, too, hang on the lobby walls.

In addition to offering staffed sessions, it operates as a freelance studio, in which freelance engineers – and this has included former interns – can contract as project engineers and use the space and equipment for their own sessions.

The studio offers its recording artists an “incredible gear list,” said Bowler. It includes one of approximately 20 Neve 9098i soundboards in the world (only two others are in commercial use in the United States, he said), a Baldwin grand piano, a Pearl pro reference drum kit, a Hammond B3 organ with an original Leslie cab, a Wurlitzer, various guitars and amplifiers and much more.

EMU’s music program prepares students for work in music education, performance, graduate school, and other related professions. It also connects music with community, cross-cultural experiences and service, and creates opportunities to perform, even for non-music majors. Scholarships are available for music majors and non-majors who are interested in participating in music ensembles at EMU.