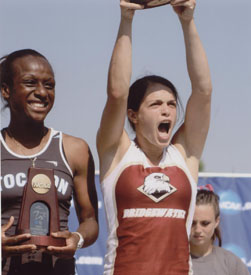 This past season, Rhodes won the ODAC title in the pole vault in both the indoor and outdoor seasons. During the outdoor season, she qualified for the NCAA Division III Championship Meet and earned All-American honors with a sixth-place finish.

Rhodes received the Elite 88 Award at the NCAA Championship Meet. The award goes to the student-athlete with the highest GPA at the championship site.

Rhodes also received the ODAC/Farm Bureau Insurance Scholar-Athlete of the Year Award for women’s track & field during the outdoor season.