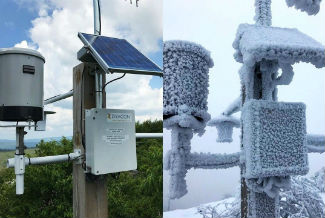 Winter access to the mountaintop weather stations can be difficult. Students (left to right) Jon Martell, Cat Wilson, and Brad Lamkin donned snowshoes to access the Bald Knob station above Virginia’s Mountain Lake in December. This station routinely records the coldest temperatures in the state through the winter months.

Load your pack with power tools or a sledgehammer. Hike up Virginia’s highest peak, in Grayson Highlands. Get to work setting up and anchoring a weather monitoring station. Then maybe enjoy the view.

It’s just another day at the office for College of Natural Resources and Environment meteorology instructor Dave Carroll and his student volunteers, who have now placed weather stations at the top of the highest mountains in Virginia and West Virginia. Carroll, who has been studying and teaching students about weather phenomena in the Midwest for many years as the leader of the annual Hokie Storm Chase, now hopes to learn more about weather patterns at higher elevations.

The weather station recently placed at 5,100 feet on the flank of Mount Rogers is the eighth monitor that is currently active and collecting data, such as temperature, wind speed, humidity, and rainfall. The solar-powered, remotely accessed stations take readings every 10 minutes and then translate the data to a website. The data is also being continually archived.

Anyone can visit the website and learn the current conditions at Mount Rogers or Bald Knob near Mountain Lake Resort in Virginia, or at any one of five stations currently online in West Virginia: Dolly Sods Wilderness, Canaan Valley National Wildlife Refuge (one on a peak and one in a valley), Bald Knob at Canaan Valley State Park, and Spruce Knob, the state’s highest peak, in the Monongahela National Forest.

Carroll is already seeing a return on investment and reports that, “It has been interesting to observe weather conditions on these high peaks over the last few years, especially those areas where few longer term observations have been taken. We are learning things we never knew before.”

One area of new knowledge involves the temperatures on the highest peaks in Virginia and West Virginia. Typically, the temperatures are comparable during times when a cold air mass is moving into the region.

“However,” Carroll noted, “latitude quickly takes over and temperatures on Virginia’s rooftop warm significantly compared to those further north on Spruce Knob, where the cold air settles in for much longer periods. This effect is even noticeable between Mount Rogers and Bald Knob near Mountain Lake outside of Blacksburg. Bald Knob stays colder for longer periods of time.”

Aside from the temperature changes on the mountaintops, Carroll also talked about another area where they are gaining new knowledge: “The winds have been very surprising — how long they blow and at such velocity.”

He went on to explain that he has observed winds blowing near 50 mph for three straight days. During the nor’easter that rolled through the area in March of last year, winds measured 90 mph. Carroll has seen winds like these topple his stations and, along with a build-up of rime ice, snap a tripod in two.

Even these incidents, however, allow Carroll and his students in the Department of Geography, which offers the state’s only meteorology degree, to learn. Although the standard method for anchoring the weather stations is 2-foot rebar stakes, the stations in locations like Dolly Sods that experience the highest winds have been re-installed using 3-foot rebar stakes and mobile home anchors. So far, these battered tripods and instrumentation are now standing their ground.

When Carroll hikes to the top of the peaks to install or tend to the data-gathering stations, he takes along students who are interested in these kinds of hands-on experiences. “I call it adventure learning,” he said. “It’s my specialty.”

Volunteers typically come from his weather instrumentation course or simply from among the ranks of those with an interest in and a passion for studying weather. In addition to gaining an overview of how the solar-powered stations operate, students also learn how to install the equipment by taking on such tasks as mounting stakes, positioning the tripods and ensuring they are level, and setting the direction of the anemometer.

Despite the challenge of packing all of the equipment to each installation site — sometimes going where there are no trails — Carroll usually has plenty of volunteers. One main reason is because, according to Department Chair Tom Crawford, affording students with meaningful, hands-on instrumentation experience in the outdoors is an important part of Virginia Tech’s meteorology program. “Employers are looking for graduates with these skills in addition to the classroom-based science aspects of meteorology,” Crawford said.

Meteorology major Drew Shearer, who assisted with the setup of two stations in West Virginia, said, “I’ve learned more about the region and the difficulty in forecasting such a dynamic area.” He said that having this kind of field experience and seeing how data is obtained will help him understand why he’s seeing certain kinds of data and make more accurate forecasts.

More recently, fellow meteorology student Bradley Lamkin assisted with the installation of the newest station at Virginia’s highest peak, saying, “This was an amazing experience! Installing the components helped me understand the data I was receiving from live reports.”

Lamkin did share a downside to the experience, as one might guess — the weather. “The most challenging part was dealing with the harsh conditions at the summits. When we installed the station this fall at Grayson Highlands, the temperature was in the mid-20s, and the winds were gusting up to 50 miles per hour.”

According to Crawford, “What Dave and his students have been able to do is really impressive. Dave has been building this monitoring network incrementally over the past several years, and it collects data for areas in Appalachia that aren’t well covered by other monitoring systems.”

Carroll echoed these thoughts and said of his aims for the ongoing project: “We want to fill in the data gaps for the National Weather Service. If they can get data from some of these places, it can be vital to them to know what’s happening out there.” It’s also vital for saving lives.

In addition, the long-term weather data is being utilized by Lynn Resler, associate professor in the Department of Geography, for an ongoing study on upland heath vegetation communities in West Virginia’s Dolly Sods Wilderness. Due to its high elevation and treacherous weather, the area is home to a variety of plants and other lifeforms that are typically only found much further north.

Resler and a group of graduate and undergraduate students began collecting data for the study last summer, and she hopes to establish permanent research plots adjacent to each weather station to allow for vegetation resampling and the assessment of change over time. This monitoring will also allow Resler to understand how plant diversity and growth form relates to climate and specific weather events such as ice storms, and how topography, which impacts the weather, also influences vegetation patterns.

“I have worked in high-elevation, windblown, tree-line ecosystems of the Rocky Mountains for most of my career. Working in the Appalachians has been an exciting change of pace; there are surprising similarities, but also important differences,” Resler said. She also commented on the importance of this particular research: “Out West, there are already established networks to monitor vegetation and weather on mountains. This will be the first of its kind in the Central and Southern Appalachians.”

Eventually, Carroll would like to have a dozen weather monitoring stations in place throughout the highest elevations in Virginia and the neighboring states, but he reports that this may take some time as the process for obtaining permits for placement on state and federal lands can be lengthy.

In the meantime, the winds continue to blow and the data continues to stream in.