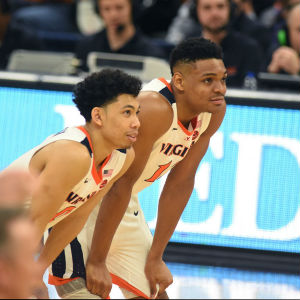 Kihei Clark and Braxton Key each had 17 points to lead Virginia in its 78-65 win over Boston College.

It wasn’t just their scoring that was important.

Clark had eight assists in 31 minutes, a number that stands out because it’s actually low for Clark this season.

Kid had been averaging 37.5 minutes a game coming in, but had foul trouble.

The foul trouble is where Key as swiss-army knife enters the story.

The team’s leading rebounder (7.2 per game) was slid over from three to one when Clark went to the bench with 3:55 left in the first half, and scored or assisted on four made baskets as Virginia closed the half on a 15-4 run to go into the break up 12.

Key then ran at the one when Clark went to the bench for a 2:30 stretch of the second half after picking up his third foul.

First-half Kody Stattmann was the Kody Stattmann you’d come to know: afraid of the ball when it gets to him on offense, getting rid of it like he’s playing hot potato.

Second-half Kody Stattmann found himself open when Boston College went 2-3 zone, and drained a three from the left wing with 12:13 to go to put Virginia up 12.

Another Stattmann three, at the 5:22 mark, gave Virginia its biggest lead of the night, 70-50.

You want to see more of that Kody Stattmann.

I noted this in Inside the Numbers, but it bears repeating: that Virginia was 15-of-18 on shots at the rim.

The paint-touching got Virginia into the bonus at the 14:21 mark of the second half, and the ‘Hoos got to the line 20 times in the final 20 minutes.

The attacks also set up open looks from three, and the shooters knocked down 10-of-17 from deep.

You’re going to win a lot of games that way.

Dislike: BC got too much

The Eagles got 25 shots at the rim, and though they only made 13 of them, that’s still a lot of rim runs.

The offensive boards led to buckets: Boston College had an 18-9 edge in second-chance points.

Nothing is acceptable in any of this.