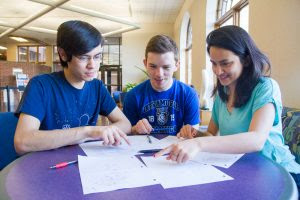 An Eastern Mennonite University team this month placed second out of 62 teams in an international cryptanalysis competition, and was one of only 15 teams to achieve Master Codebreaker status by solving all three challenges.

The annual contest, hosted since 2011 by the mathematics department at Central Washington University in Ellensburg, was sponsored by the Pacific Northwest Section of the Mathematical Association of America.

Teams or competing individuals could use books, the internet and computer programs – but no living person other than a teammate – to solve the challenges. Along with their correct answers, they were required to describe how they reached a solution and list any sources used.

“The most intense part of the competition was waiting for the release of the problems,” said Byer. “Once released, I think we all kind of forgot that it was a competition and just had fun solving the problems.”

They worked quickly, solving all three problems in under five hours – much less time than it took last year, when Byer, Harder and senior Ben Stutzman(currently on cross-cultural) placed first after nearly 20 hours of work.

In another, with Harder’s lead, they were given a large number of letters split into groups of one to five letters each to decode.

“After half an hour of trying different approaches,” he said, “we realized that the letters, when marked on a keyboard, were arranged like Braille patterns. We then easily solved it in a matter of minutes.”

The team solved Byer’s problem by writing a computer program.

“It had a method of encryption already laid out, so we knew all of the steps that had been taken to encrypt the secret message,” he said. “All that remained was to determine the code word used by those sending and receiving the message to keep the contents of the message encrypted. We knew the code word was four letters long, so to break the encryption we wrote a computer program to test over all possible words and return anything that looked like English.”

Everything came back gibberish, he said, except for the word “news,” which revealed the secret message.

In addition to last year’s first place finish, EMU performed well in 2014, when EMU teams took both first and third place. That year Byer was on the third-place finishing team – as a freshman at Eastern Mennonite High School.