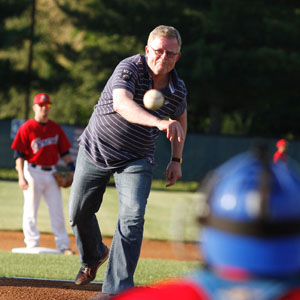 Thursday’s Waynesboro Generals game was started off with a ceremonial first pitch from J.P. Wegkamp, a man visiting Waynesboro with his wife and daughter all the way from Holland.

Just before he threw that opening pitch, the family agreed to sit down and share the story behind their visit.

Five years ago, Maartje Wegkamp’s best friend passed away from cancer here in the Valley; upon her passing, her father purchased a memorial brick in the Serenity Garden at Ridgeview Park. As a recent graduate of medical school, J.P. gave her the gift of this trip.

She discovered last night’s game via the Generals website, and knowing her father to be, as she put it, “a fan of baseball,” she said they had to come.

As soon as the conversation turned to baseball, J.P couldn’t resist reminiscing about the 1960s, when he used to play baseball in Holland and Ireland. J.P. joined a local team in Holland at the age of 14, and ever since he has had a love for the game. 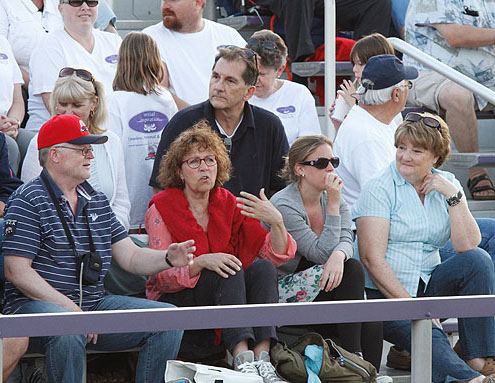 He talked about games he would watch when teams from all across the world would come to Holland and engage in tournaments. His care for the game can easily be symbolized by his glove, laced with his name, hanging in his home since he wore it all those years ago.

The “highlight” of J.P.’s trip to America came yesterday morning when the chairman of the Serenity Garden Board delivered the happy news that he would get to throw the first pitch at last night’s Waynesboro Generals game.

J.P. emotionally described the Serenity Garden and the memorial brick saying it “really opens your heart to those who have passed.”

After an emotional morning, J.P. was ecstatic to get out on the field and throw the opening pitch. J.P. left the game with a Waynesboro Generals T-shirt and autographed baseball.

Not bad for their first American baseball game.