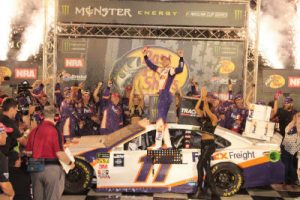 At the start of tonight’s race, Denny Hamlin was clearly, the leader of the pack.

Hamlin qualified his FedEx Toyota Camry in the top spot in qualifying on Friday and was hoping to maintain his 2019 momentum after winning at Pocono. After a clean start to the race, Hamlin was sailing away in the lead. Then at lap 83, a tangle with Jimmie Johnson and Austin Dillon threw the dream of Hamlin maybe winning this race from start to finish, out the window, like the baby with the proverbial bathwater.

Down in a hole by several laps, Hamlin and the Joe Gibbs Racing/FedEx Toyota could not go anywhere. Trapped in the middle of the pack, Hamlin was struggling to maintain position.

But according to car owner Joe Gibbs, Hamlin used a little of his abilities learned off the track to rebound back to capture a big win under the lights at Bristol.

“He’s grown off the track”, according to team owner, Joe Gibbs, following the race.  “I do see that.  He’s maturing, he’s made a real effort and maturing as a person and a race car driver and crew chief of Chris Gabeheart is part of that.”At the end of Stage One, Kyle Larson had taken the win and the incident in Stage One had put Hamlin down by two laps and even making it in the top ten wasn’t looking promising.

By the end of Stage Two, Kurt Busch had taken the top spot and was looking to recapture the Bass Pro Shops | NRA Night Race that he won last year.  But despite leading nine laps, Kurt Busch could not keep his Monster Energy Chevrolet in the top spot and the Las Vegas native would post an eighth place finish.

But this weekend was “big”, according to Hamlin.  In fact, the feel was simply “electric” this weekend at Bristol.

While the mood may have been electric, the race was not a “clean race” to Hamlin’s crew chief.

Despite the hole the FedEx Toyota team found themselves in, Hamlin stressed that he “did not take a lap off.”

“I mean, I just can’t wait to get to a racetrack now. Its incredible the adjustments we’ve made this season.” Last season, Hamlin went winless. This season he has a Daytona 500 under his belt and three other wins including the recent Pocono race and the Bristol night race.

While Hamlin was finding inner strength to rebound back, the race featured drivers struggling to maintain a line and commit on the .533 half mile track.  For a few laps, the racing groove would put some drivers high on the high banks of Bristol, with changing conditions forcing drivers to go low and midway to keep their car in contention.

With all the jockeying on the track came 23 lead changes and during that time, Hamlin and company found the solution to their deep hole dilemma.  Play it where it lands.

But before Hamlin could truly call tonight’s race a victory, he had to prove his team was on a roll in 2019. Hamlin would have to battle fellow Toyota driver Matt DiBennedeto, who got the news abruptly this past week that he wasn’t coming back to Leavine Family Racing in 2020.

DiiBenedetto, who qualified seventh on Friday, felt he had something to prove after the announcement made on social media.

Some of the best racing action occurred between DiBenedetto and Joe Gibbs Racing driver Erik Jones, who is rumored to be moving to LFR in 2020 while Joe Gibbs makes room for Chnristopher Bell in the JGR #20 car next season. Joe Gibbs Racing and Leavine Family Racing are in a development/technical alliance between the programs. In the media center, Gibbs did not want to talk about the situation, saying it is a long process.

Jones would take the lead on lap 373 and hold the lead for 23 laps before lap 395, then smack the outside retaining wall and end his chances of winning the race.

At lap 396, Matt DiBenedetto made his move. DiBenedetto would lead for 93 laps and appear to be poised to win his first NASCAR Monster Cup Race at the World’s Fastest Half Mile.

But on lap 489, hard charging Denny Hamlin returned to the top of the back and led the final 12 laps picking up his 35th career victory in 494 races.

“I knew I was going to get him, there’s a lot of people that don’t want to see it happen but it’s going to happen.” replied Hamlin. He added, “Matt has been clawing but he would also say he has gotten better, year after year.”

Hamlin’s teammate, Kyle Busch, who started deep in the back after a bad qualifying effort finished fourth and led 6 times for 91 laps.

Chase Elliott finished the night with a top-five finish, ending the night in fifth.

“This win was certainly gratifying,” replied Hamlin, “but its another to start ninth on the restart and come from the inside line and march to the front.  That’s special.”

The NASCAR Monster Energy Cup Series takes the week off before returning to Darlington, SC for the Labor Day Classic at the Lady In Black.

Other notables: Kevin Harvick finished in last place after losing the clutch/transmission. Harvick had led 28 laps of the race before the mechanical failure.