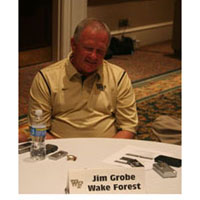 “Number one is we are playing good teams. That’s the problem. When we’ve been successful in the past, we’ve won our share of those games, but in the past couple seasons we haven’t done that. It’s a problem. It’s a situation where we are doing almost everything we can do to win, but we’re not making the plays we need to make. In a lot of cases, we’re just not doing the things that good teams do. We’re mentally not doing good things, and we have to keep working on it until we get it right.”