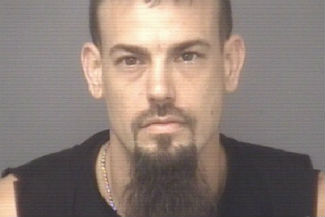 A man who had been sought after fleeing a law enforcement pursuit in Augusta County is now in custody.

Jimmy Dean Bolenbarker, 34, of Staunton, was arrested on Wednesday at a residence on 19 Blacksmith Shop Road.

A vehicle pursuit involving Bolenbarker on Monday began in Fishersville and ended after Bolenbarker crashed the 2013 Ford he was driving and fled on foot in the Greenville/Cold Springs. Bolenbarker eluded capture, and investigators received information that led them to a residence located at 19 Blacksmith Shop Road on Tuesday.

During the incident on Tuesday, a search warrant was executed, and the residence was searched with negative results.

Investigators received additional information that led members of the Skyline Task Force, Augusta County Sheriff’s Office, Staunton Police, Rockbridge County Sheriff’s Office and Virginia State Police back to the residence at 19 Blacksmith Shop Road at 1:30 p.m. Wednesday to execute a search warrant for the residence, and to capture Bolenbarker, who was believed to be hiding inside.

The residence was secured, and negotiators with the Augusta County Sheriff’s Office attempted to contact Bolenbarker and get him to surrender. This standoff resulted in the activation of the Augusta County SWAT Team. SWAT was assisted by members of the Staunton Police Department with the agency’s tactical robot.

During the course of the standoff, chemical agents were introduced into the residence, a search was conducted by the SPD robot, and Augusta County K-9 units within the residence. At 5:09 p.m., SWAT Team members, while searching the attic of the residence, contacted Bolenbarker concealed in the attic. Bolenbarker attempted to exit the house through an attic eave, but he was taken into custody without incident.

Bolenbarker was treated for exposure to chemical agents and was transported to the Middle River Regional Jail and incarcerated.

Additional charges are pending for obstruction of justice for several suspects that helped conceal Bolenbarker from law enforcement.