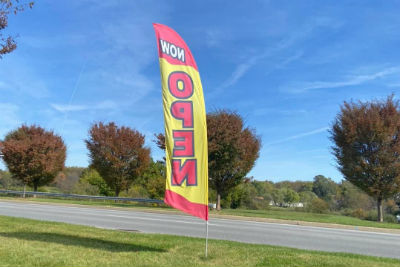 WAYNESBORO — Going to a movie during a pandemic may mean remembering to bring a mask to wear when not eating your popcorn and snacks, but movie goers are still welcome to take in the latest from Hollywood at Zeus Digital Theaters.

Until early last week flags along Lew DeWitt Boulevard brought attention to the fact the business was open.

But the signs were temporary and according to city ordinance had to be removed.

“The signs actually had a big impact on our numbers,” Brett Hayes, owner of Zeus Digital Theaters, said.

According to Hayes, his flags said “Now Open” and were up for 31 days when someone filed a complaint with the city that the signs had been up for too long.

Hayes said that in the City of Waynesboro temporary signs can be displayed only 30 out of every 180 days.

“I’m not trying to pick a fight with the city,” he said.

But for Zeus Digital Theaters, no signs makes movie goers think the business off of Lew DeWitt Boulevard is not open.

“The ‘Now Open’ signs kind of helped reinforce we were open,” Hayes said.

He said he has noticed that the pandemic has brought the best out in some people, but the worst out in others.

And residents worried about large gatherings of individuals have targeted Zeus Digital Theaters, although Hayes said he has yet to find evidence that the spread of COVID-19 was traced to a movie theater.

“There are people who are just interested in not having us in business,” he said.

The spread of the coronavirus has been attributed to weddings, family funerals, political rallies and church, but not theater attendance.

“It’s a tough time to be in business,” Hayes said.

Hayes said the “exact same signs we have are all over town” in Waynesboro, including in front of businesses on Route 250.

He thinks it would be nice during the pandemic for the city to relax some city codes on signage.

“The city is apparently working on the code to allow us to have them up for 60 days,” Hayes said.

Displaying temporary signs during the COVID-19 pandemic would be helpful for businesses.

Hayes said when Zeus reopened July 21, complaints were filed that patrons were not wearing masks, which was untrue.

Hayes said that the Waynesboro Planning Commission passed a recommendation to extend the display of temporary signs from 30 to 60 days, but a hearing must be held.

“What I would like is a reasonable ability to communicate to people who are in front of my building that we’re open,” Hayes said.

Zeus Digital Theaters is open Sundays to Saturdays at noon with movies showing at 1, 4 and 7 p.m. This past week, Hayes said, four new movies were shown, but older movies also appear at Zeus every week.

A Drive Thru Trunk or Treat will be held at Zeus Theaters, 120 Osage Lane, Waynesboro, with the participation of 25 local businesses on Friday from 4 to 7 p.m.