Zach Pereles: Virginia basketball was a joy to cover 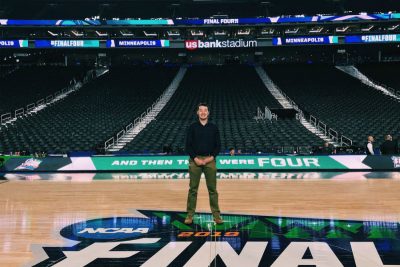 MINNEAPOLIS — Minutes after Virginia had finished cutting down the net, had embraced family members and friends and had finally exited the floor, I stood in a quiet corner — perhaps the only quiet corner of the Virginia locker room — with Jack Salt. The fifth-year senior had just played his final game as a Cavalier, wrapping up a wonderful career in the most wonderful way.

“I love basketball, but I know there’s bigger things than basketball,” Salt said as Monday night turned to Tuesday morning. “This is great, but the connections I’ve made at this school, the bonds I’ve made with the players, coaches, staff, that’s the biggest thing.”

A few minutes later, I went over to Kihei Clark. When Salt committed, the Cavaliers had never won an NCAA Tournament game under Bennett. Since Clark’s been in Charlottesville, they haven’t lost one. On Sunday, Clark had been asked to describe his first season in one word, and, after a long pause, he decided on “crazy.” On Monday night, after capturing a championship, he had a different word.

We all should be, too.

After Virginia had endured the worst loss in college sports history, Tony Bennett selected Kyle Guy and Ty Jerome to join him in answering the media’s questions. Throughout the five days in Minneapolis, he chose them again and again, and they complied, often with smiles on their faces, even when talking about painful memories.

“After the UMBC game, we sat in the holding area after that loss, and I said, we’re not going to put up Isaiah [Wilkins] or Devon [Hall], our two seniors,” Bennett said Saturday. “Ty and Kyle, we’re going to be up there, and that’s going to be one of the hardest things, facing that press conference, but it starts now. It’s going to mark something. I said, ‘We’re going to get through this, but you guys need to be up there with me, and we need to go through this, and we need to go through next year together. We need each other.’

“I knew it was going to be such an important time in our lives no matter how it played out.”

It played out, as Monday night’s national triumph showed, in brilliant, heartwarming fashion. The story on the surface — of climbing out of the UMBC-sized crater and simply into the sport again, much less all the way to its peak — is a great one.

“What I know is, no matter how much you fail, if you get up and keep fighting, you can have good results,” Mamadi Diakite said Saturday. “That’s what we’re trying to prove to everyone. It doesn’t matter if you lose against a 16 seed or whoever. Just keep doing you. Keep fighting. Come back again. Try again.”

Simply getting up off the mat took heart, and the Cavaliers did it with sincerity and thankfulness. Bennett called the loss a “painful gift.”

“Coach said something that really resonated with us, is to run to the start line, not the finish line, and we’ve done that every single game this year,” Guy said.

Guy famously changed his Twitter avatar and his phone background to the iconic picture of him keeled over, tears streaming down his face as the Retrievers celebrated. He wrote letters. He opened up about his mental health and anxiety struggles. He put in the work both on and off the court. Every endeavor, it seemed, provided a starting line to which he could run. Every game, then, provided a new opportunity for him to move farther and farther from that awful night last March. But he didn’t forget about it. He never will.

“You guys don’t have to apologize for asking those questions,” Guy told an apologetic media member who about the loss following the Cavaliers’ ACC Tournament triumph over NC State last month. “I’m happy to answer them.”

Guy is the leading face to that UMBC-loss-turned-NCAA-champions story. He — along with his teammates — endured vitriol all season simply because they, a bunch of college students, happened to lose to another bunch of college students. Diakite, born and raised in Conakry, Guinea, hadn’t watched any college basketball growing up. The magnitude of the loss, therefore, hit him especially hard.

“I knew it was bad,” Diakite said. “I didn’t know how bad it was until we got on the bus and we couldn’t get in the hotel from the front. We had to go all the way back. And that’s when I knew it was really bad.

“I was ashamed of myself.”

Diakite is a great story in his own right, too. After only having started to play organized basketball in high school, when he moved from Guinea to Virginia, he developed as an outstanding defender, capable rebounder and opportunistic inside scorer. His feel for the game grew significantly, too, which allowed him to see more playing time as his foul rate went down. But Diakite grew as a person, too. After struggling in two ACC Tournament games, Diakite requested a meeting with Bennett, simply to reassure his coach — and himself — he was ready for the NCAA Tournament.

“I just threw a challenge to myself, in a sense, by telling him I got his back, we’ll make it to the final and actually win it” Diakite said Monday. “Telling him made me think about it every night, every day, every second I was working and made me more hungry. I wanted to contribute for every game, and I think I did.”

The Virginia roster is filled with more great stories that cut deeper than the turnaround would indicate. There’s De’Andre Hunter, unable to play against UMBC, coming back with a career-high 27 points against Texas Tech to lead Virginia to the championship. There’s Ty Jerome, whose insane work ethic after the UMBC loss started with his meeting with Bennett three days after the loss. There’s Braxton Key, who found out he’d be immediately eligible after transferring from Alabama in Greek Art History class, of all places. There’s, of course, Salt, who’s been there through it all, and Clark, who almost never ended up at Virginia in the first place. At the base of it, there’s an underlying belief in one another. When everyone said Bennett or his system or his players couldn’t get it done in March, the Cavaliers simply grew stronger together.

“We’ve all had our own battles, and I said earlier that it’s a really special group, because we all had the same ‘why’ [among] other ‘why’s,” Guy said Monday. “But to share the same one and to battle everything we battled through and come out on top is a fantastic feeling.”

Throughout the season, Virginia kept the same mindset. The players never grew angry or frustrated in situations where they easily could have. They adopted “calm is contagious” as a motto that helped them survive several hectic finishes, and one of Bennett’s many sayings kept them on the right path throughout

“One of the things we talked about is, ‘Don’t grow weary in doing good; for at the due time, you’ll reap a harvest,” Bennett said. “These guys have been so faithful this year, and that’s been such a joy to me.”

Now, they have reaped the greatest harvest.

In that quiet corner in Virginia’s locker room, Salt paused a few times to look around, to take in his last college basketball locker room — the smiling faces, the laughter, the players answering questions, the feeling of being part of a great team and a great program. It’s a program Salt himself helped build.

“Coach Bennett recruits great guys with great character,” Salt said. “And I was privileged that he thought of me to be one of those guys. To be at this point right now, I would have never thought, coming from New Zealand, I’d be in this position.

Having gotten the chance to report on these players this season, to see their work ethic and the class with which they handled the toughest of circumstances, I am honored and privileged, too.