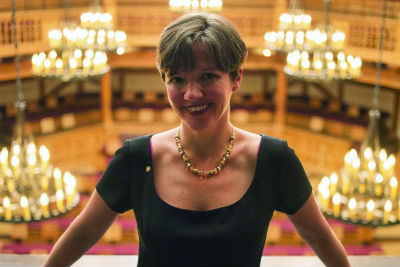 Amy Wratchford will be stepping down as managing director of the American Shakespeare Center at the end of the year, ending a more than 10-year tenure with the Staunton-based theater company.

“It has been an amazing 10 years,” said Wratchford, who joined ASC in 2010, presided over the company’s growth from an annual operating budget of around $2 million to a high of $4.2 million at the beginning of 2020.

A focus at the outset of her time with ASC was the effort to retire $1 million of inherited debt and place the company on a sound financial footing, including the creation of three strategic plans, most recently a forward-looking five-year plan that was adopted by the ASC Board of Trustees in February.

“We’ve successfully produced our SafeStart Season under impossible odds and have a strong plan for 2021. It is time to bring in new eyes and fresh energy,” said Wratchford, who led advocacy efforts at all levels of government, represented ASC on state and national grants panels, and consulted with organizations across the country.

Within the community Wratchford serves on the Shenandoah LGBTQ Center’s Community Advisory Board, Shenandoah Valley Governor’s School Advisory Council, and is an elected member of the Staunton City School Board.

“Amy has provided invaluable leadership and devoted service to the American Shakespeare Center for a decade,” said Rodney Young, chair of the ASC Board of Trustees. “Amy’s selfless devotion to the mission and success of ASC has been constant and was never better exemplified than her steady leadership during this most difficult year managing the unprecedented upheaval and disruptions visited on ASC and the theater industry by the COVID-19 pandemic.

“The board respects and accepts her decision to step down with sadness but with an appreciation and gratitude for all her contributions to ASC and we wish her great success and joy in her future professional endeavors,” Young said.

“Amy has had a steady hand on the tiller for a decade of growth and change at ASC and every one of us owes her an extraordinary debt of gratitude for the sacrifices she has made to keep us going,” ASC Artistic Director Ethan McSweeny said. “Beyond the Playhouse, she has done an incredible job enhancing the vital economic contributions ASC makes to Staunton and the Shenandoah Valley. She will be greatly missed by her colleagues and the many artists that have had an opportunity to work with her,” McSweeny said.

Of necessity, 2021 is going to look different offstage. Over the course of the next three months, the company will ramp down full-time staff transitioning toward an intentional “dark” period in January and February while beginning an innovative quarterly budget planning process in which future programming is tied to achieving fundraising benchmarks.

ASC looks forward to welcoming audiences back to the Blackfriars Playhouse in the Spring for its hallmark Actors’ Renaissance Season.

Stay up to date with American Shakespeare Center by visiting www.americanshakespearecenter.com.