Worship given new meaning when led by students 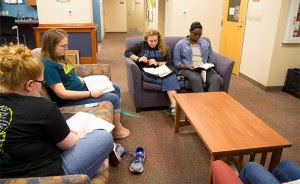 Making s’mores over a campfire, going out for milkshakes, praying for each other, reading scripture, or conversing about the complexities of life: students in Eastern Mennonite University’s residence halls are often ministering in relationship.

These relationships are formalized in Worship Nights, a weekly event in each of the residence halls on campus. The four groups meet on different nights of the week, depending on the schedules of the student leaders. And activities vary: On Tuesday nights in Cedarwood, the gatherings alternate between a study of 1 Peter and a prayer time.

While Worship Nights have been a part of campus ministries for several years, undergraduate campus pastor Lana Miller has made significant changes to the program’s focus and foundation. In previous years, residents in the halls alternated the planning of events for the others.

Worship Nights are now “focusing on creating and entering into relationship and intentional conversation,” according to Miller. The goal for student leaders is to respond to the group who comes.

Now specially trained students within each residence hall, called Ministry Assistants (MAs), plan programs for and with their fellow residents, Miller says. They are also enrolled in a ministry exploration class led by Miller, which asks “how are you listening to God, to each other, and to yourself.”

This year’s MAs are

These students are mentored in their responsibilities by Pastoral Assistants, who are paid for their time. PAs include:

Miller sees this new focus as forming leaders “who then help others.”  The team approach “strengthens the core so that leaders are well- equipped to reach out with genuine care rather than an agenda,” according to Miller.

It also keeps student leaders from becoming discouraged if an event isn’t well attended. In the past, student leaders sometimes became “defeated and depleted if they worked hard planning something and then few people came,” Miller said. The new emphasis on relational leadership and intentional conversation “takes off the pressure to perform.”

Pastoral assistant Rebekah York, a senior peacebuilding and development major, also sees the benefits of the new approach: York, who shares PA duties with Wes Wilder in Cedarwood residence hall, says she’s noticed many changes over the past two years, and is energized by the new structure. “My crazy ideas are supported and I have people behind me, encouraging me to keep going. That makes the world of difference.”

One of York’s “crazy” ideas was to have a Bible study studying the connection between the gospel and justice (the events are called Jesus + Justice = “Jestice”) with students and faculty. Though it’s not going “exactly as planned,” York is confident because of the encouragement she receives from Miller, and because she is “given a space and time to see if [her ideas] could work.”

York also appreciates the relationships she’s developed with first-year and sophomore students. “We are much more involved in the spiritual lives of the underclassmen and I’ve been able to connect with people I would not normally have had any contact with,” she said. I think it is really important for the upperclassmen to be involved with the underclassmen. I loved the upperclassmen who took an interest in me and my life, and were willing to let me ask difficult questions.”

Miller says this new approach is being evaluated, with the idea that changes can be made to respond to new creative possibilities in guiding student leaders in campus ministry.